Catch up on all the Omaha Beach Diorama posts

The Wife relates a tale. Recently I had drunken almost tears at my diorama accomplishments so far, and today she asked this question, “Why do you take such joy in all this death and destruction? Why the obsession with all the blood?”

History is remembrance, it’s foolish to hide from it. History is to me a study of human nature, and I like to build stuff….

I figured since I built a two tier bunker system I could do something interesting with ‘splosions, 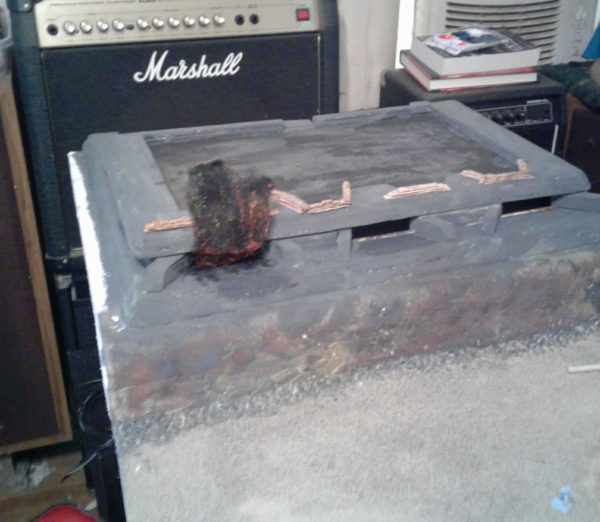 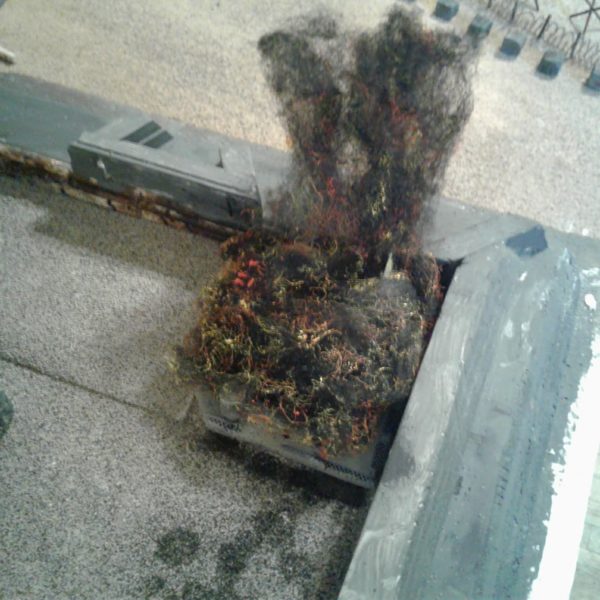 Yes, there is a Flak 36/37 under there, burning…. I had to build a blast wall so the other 88s didn’t get wrecked. I have a pair for the other positions and still thinking naval gun…pricey. 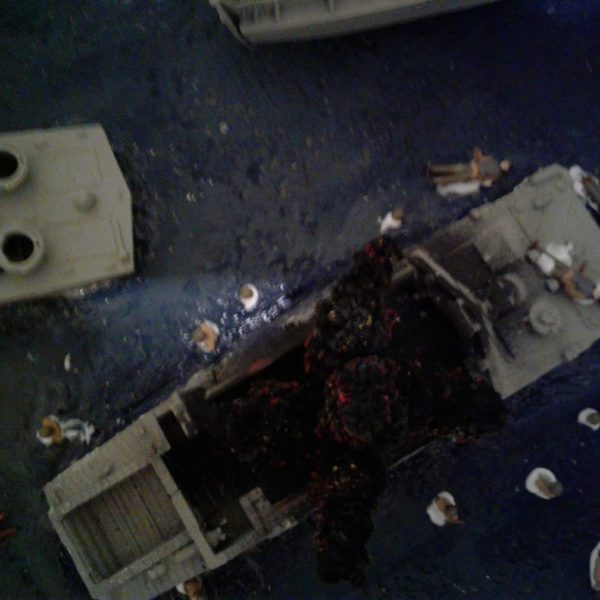 Man overboard! I finally got the men in the water, the White Glue dries clear and works with the water chemically, so don’t sweat that. 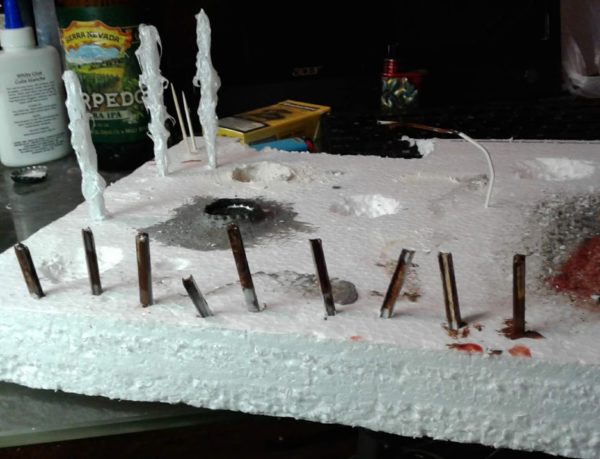 I thought maybe this is too busy, but then I watched a few videos, and decided to make a bunch more water ‘splosions, the real deal was WAY worse than anything I can reproduce, at least in this lifetime, and the H beams in the surfline are a nice touch. 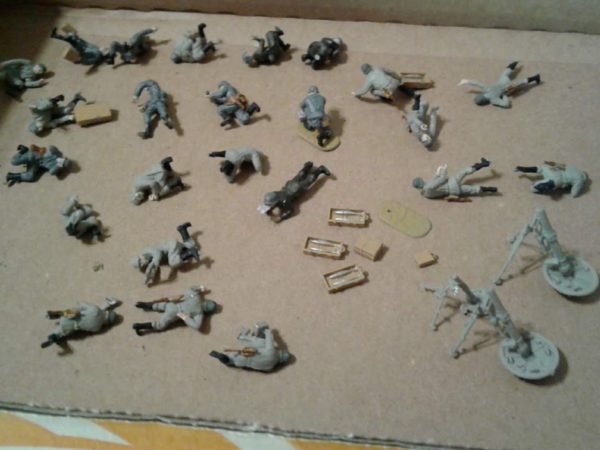 I’m finally getting a handle on the men (euphemism alert!). My German mortar team is done. 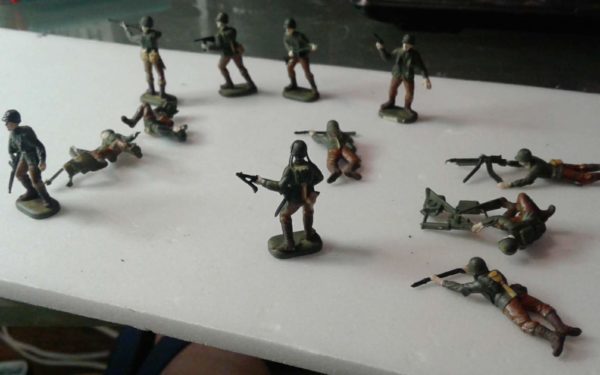 And after a fiasco with a first group of Americans, I found some I can work with. Painting men is an ongoing process that never ends, whether you’re doing 7 colors or 4, it’s definitely the worst part of the entire project, but if you take it as a challenge, and work bit by bit, the results are worth the effort. 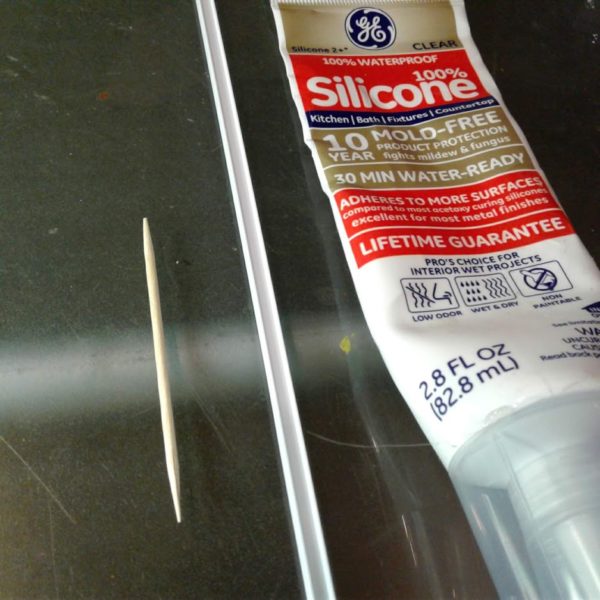 How do I do stuff? Water ‘splosions need these ingredients. I see guys using a full blown caulking gun for this stuff, and to me it’s overkill, anyway. Take a stick of H beam that you have lying around, (you do have ¼” Styrene H beam , right?) cut it and slather clear silicone on generously, (Jesse may have some thoughts, but whatever) and then take the toothpick and drag the silicone ’til it looks jagged, then let it dry. Then dry brush white paint over the outside edges. Take a small brush full of paint and knock off 95% of the paint, then brush upwards, and you’re done. 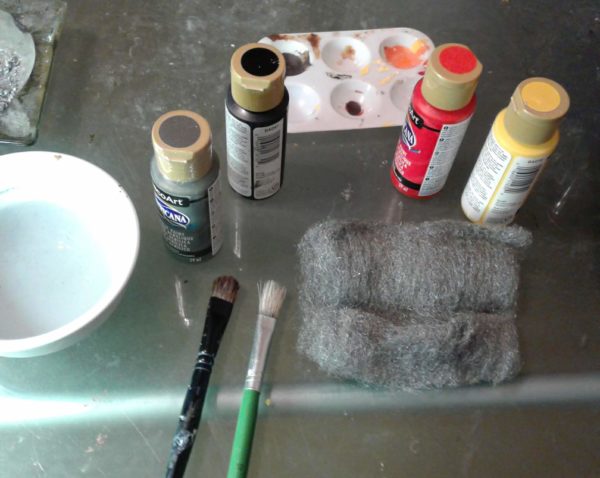 Smoke/Land ‘splosions. These are funny to me because it’s so damn easy. Here we take some steel wool and pull and puff it out, then spray it black. If you miss a spot it’s cool because it’s grey. Yippee! Then dry brush, in order: Chrome Yellow; Crimson Red; Mix for Orange; Black; Grey; Black; Mix Grey and Black. Ingredients above. 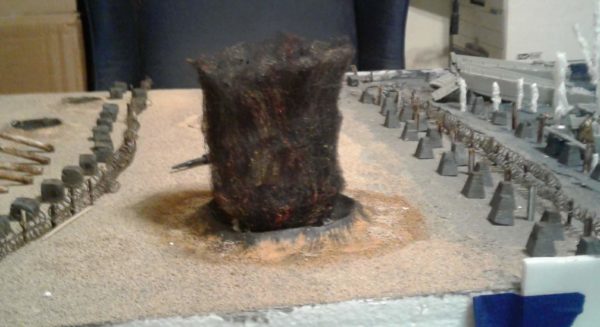 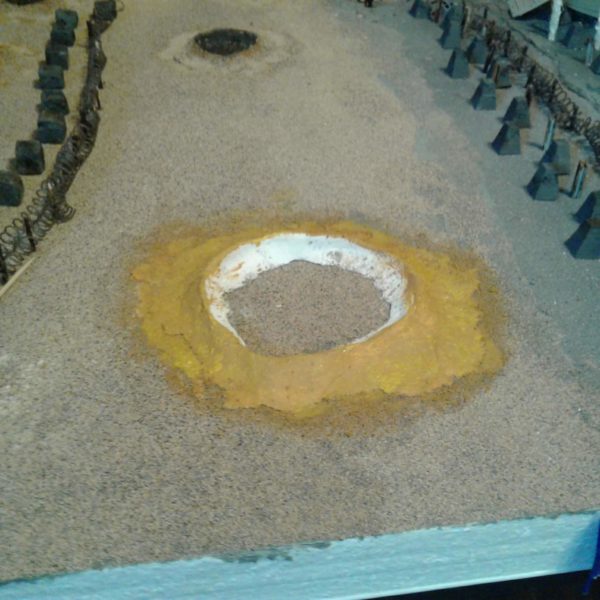 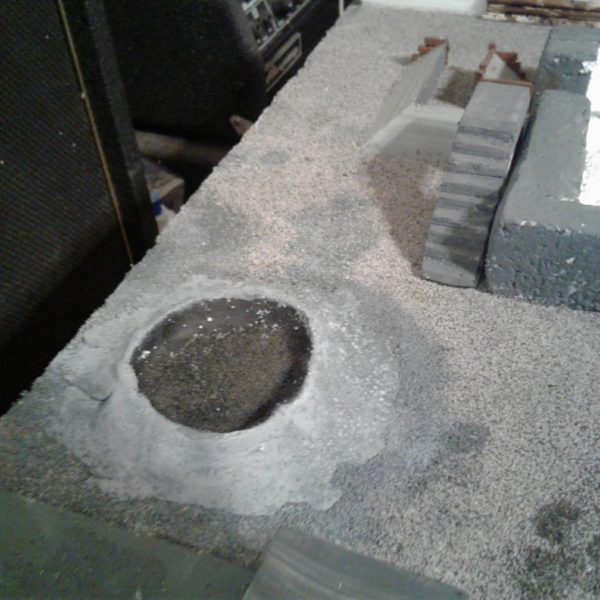 We added a few 500 lb bomb craters, because, craters!

Everything is in place for the water pour, so barring any bullcrap, our next installment will be WATER! 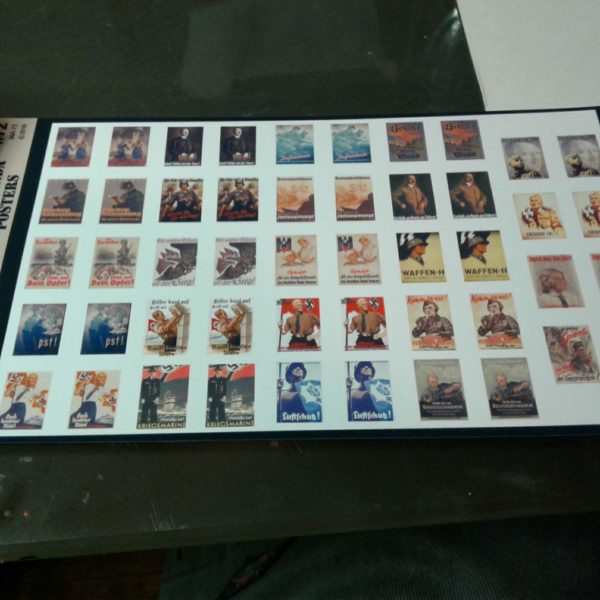 Propaganda! I found the source of my previous posters and they do them in 1/72 scale, they are wonderful! Details, and great color. Bravo!

Until next time, thanks for watching!

Drafted or volunteered, most of the men who were at Omaha were 18-20 year old kids, had never seen combat, and were told that 4/10 would die that day. The prevailing thought was, not me, the other guy, so gung ho they went to their deaths. There are entire squadrons of men who were flat out never heard from again, and no record of what happened to them. This is here, this is now, this is war. 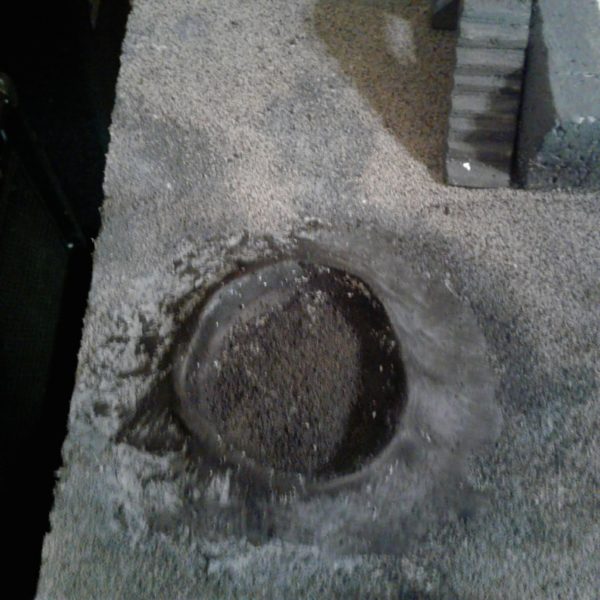 I work on several sub projects at once, it keeps me moving forward and breaks up the monotony, all moving towards the pour. like the new 500 lb bomb craters, and some new blast effects. 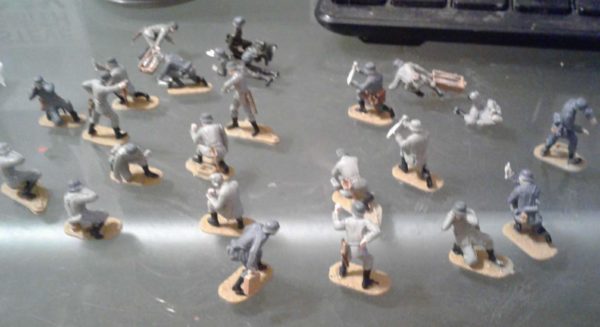 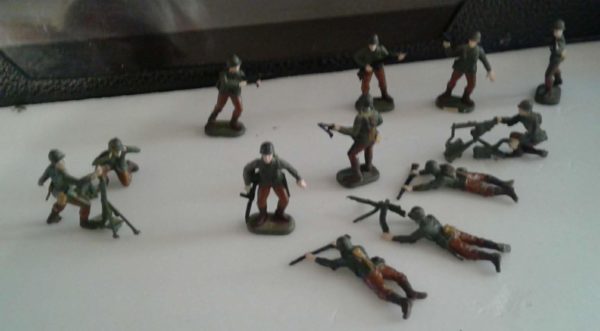 And a boatload of U.S. troops.

I still need to flock the bases they stand on, but otherwise ready for the board. I decided on stands because they are so damn small they are hard to locate and stand with just glue. 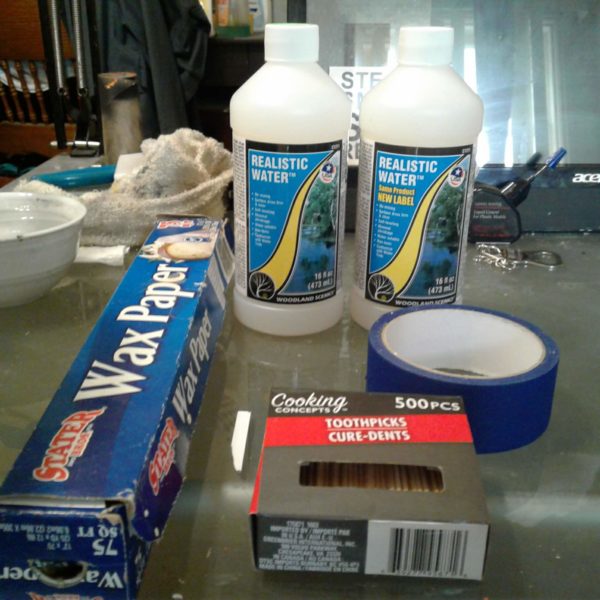 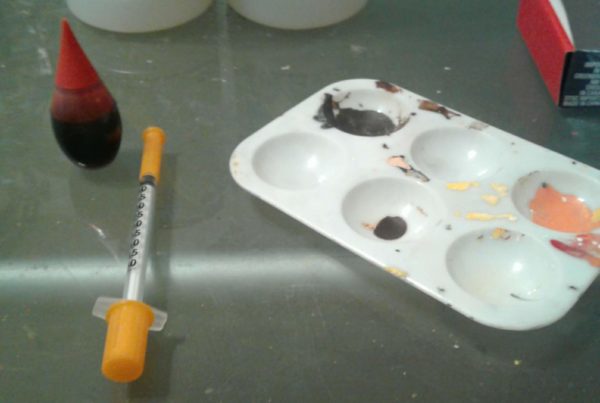 I’m ready to go, no flecks of dirt, foam, cat hair, etc. I have my materials.  The syringe is to inject the food color/water mix. The tape and wax paper are to tent it from dust after the pour.

Realistic Water, probably need more. Toothpicks and plastic bits to move the water around. Light, lots of it. Cobra, but only one to calm myself. If I mess this up, the whole thing will be ruined. 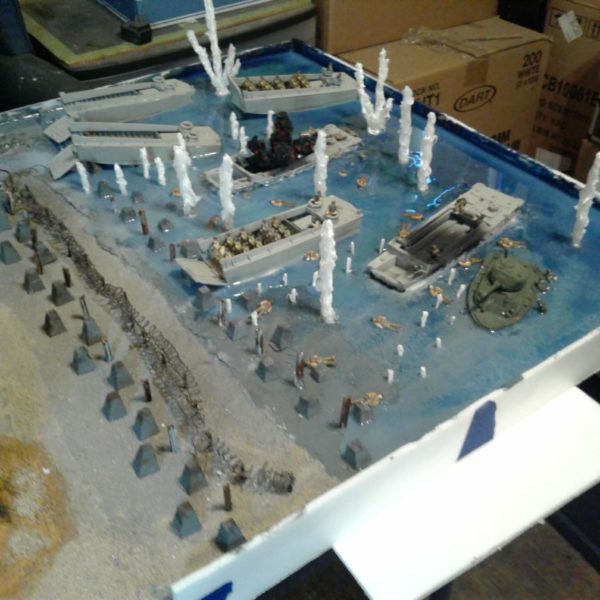 Things worked out well, and with prep it turned out nice for the first pour. The stuff flowed like…water, and I’m glad I leveled the board or it would have been a disaster. 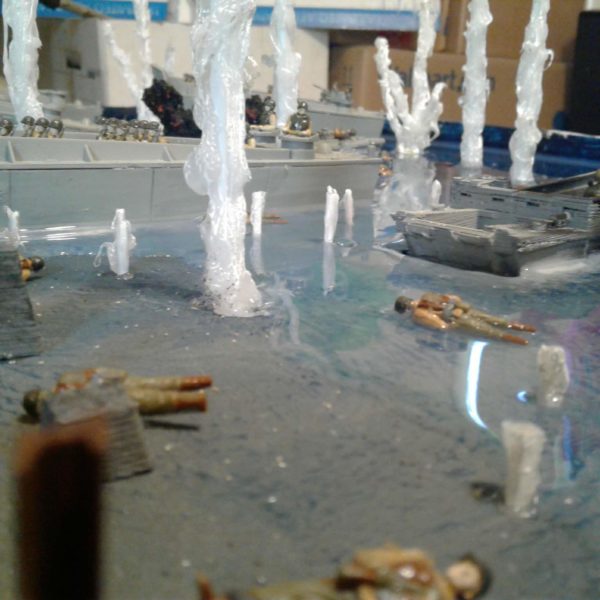 And here’s good example of guys in water, and guys that are not yet in water, where I finished the first pour transition. 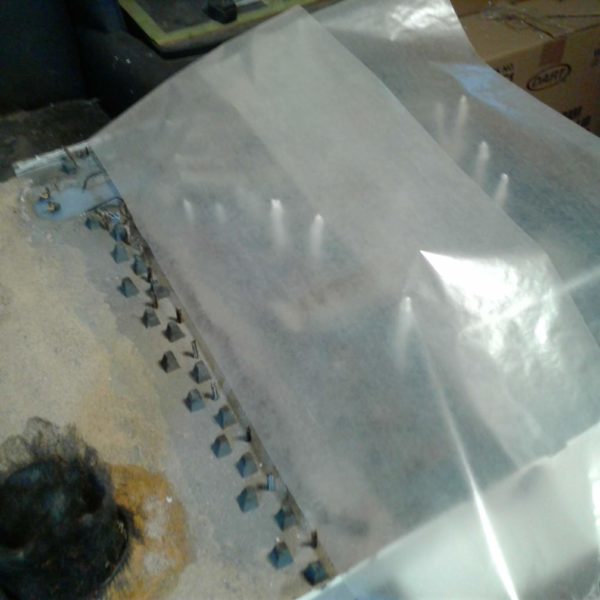 And the tent FWIW. I’m told it’s a good idea.

Now I wait at least 36-48 hours and then pour again What will I do to fill the  time?

Gaaaahhhh! How about fix the leaks so you don’t lose 20% of your water? All it needed was some blue tape on the bottom seam. I didn’t catch that, derrr! Due to the contours most of the pour is intact and it won’t be affected at all. 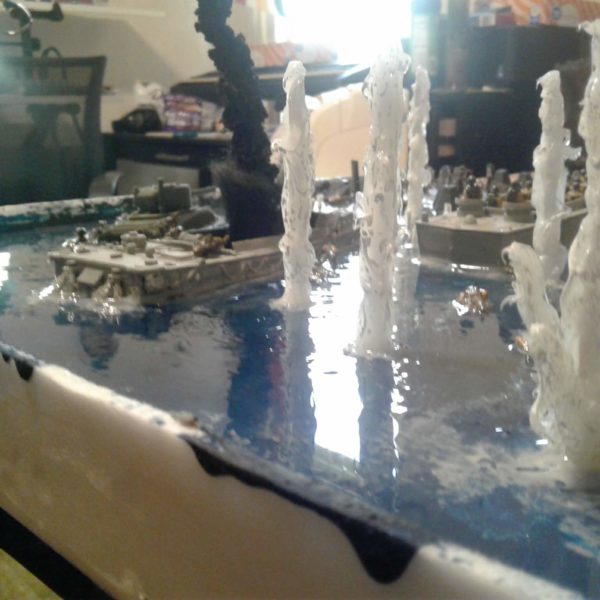 After sealing leaks, I went for the second pour, and found two more leaks, which I promptly repaired and ended up with a pretty nice water base.

Once I’m satisfied/broke, I’ll add the waves, ripples and surf effects with the water effects stuff from Woodland Scenics, then a dry coat of white caps and we should have some good water. 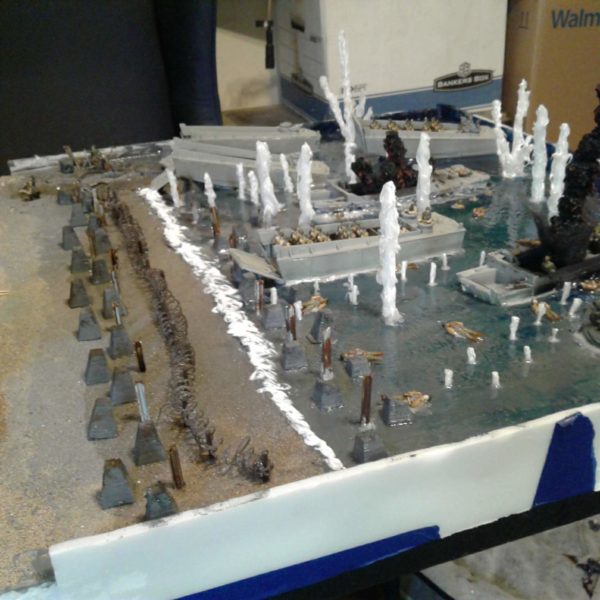 This will dry clear, then, after some more waves and ripples, it dries clear, then dry brush (popular, ain’t it?) some white on top to create whitecaps, etc. I’m stopping here so I can at least post before I’m done, ’til next time.

It's been an eventful past 12 hours. A server crash brought the site down and Sloopy managed to get himself…

Tuesday Afternoon Links, If, You Know, You Are Into That, Like, Whole Tuesday Thing, Man.

"Open to me," Pie whispered. "Open to me and I will show you such things that will make a penis…