When Timepieces Were Made to Last

I’ve noticed that Glibs seem to enjoy the finer things in life and finely made things.  So I figured I’d combine the two here.  Now that SP has given us the ability to edit in WordPress it seemed an opportune time to share some pictures of an old hobby.  Before  work  responsibilities and old age in the form of poor eyesight and loss of dexterity caught up with me I used to collect and repair vintage watches.  I specialized in the Hamilton brand.  This allowed me to become familiar with their various movements and to acquire parts for repair.

From our friends at Wiki:

The Hamilton Watch Company had its genesis as an American watch design and manufacturing company, which incorporated in 1892 and produced its first watch in 1893.

I don’t collect anything made after 1969 and their acquisition by the Swiss.  After that point their watches used Swiss movements.  Interestingly enough, variations of those Swiss movements are still in use today in many Swiss made mechanical watches. 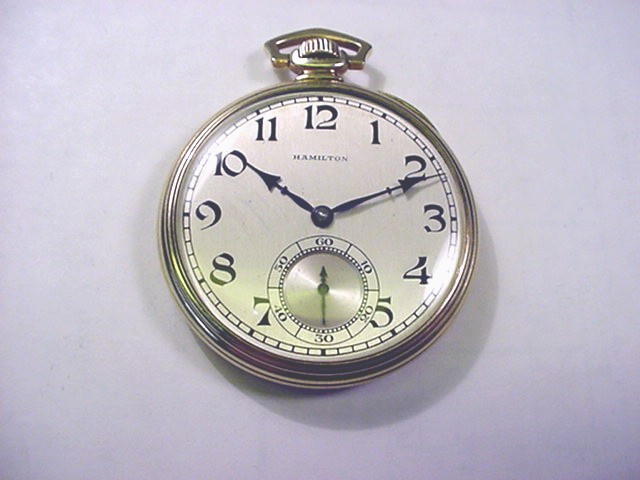 This is a Hamilton 12 size gentleman’s pocket watch.  For pretty much everyone who has no idea what that means it is 39.79 mm or 1.567 inches in diameter.  That’s the width of the movement inside the watch not including the case or the crown.

Smaller pocket watches like this generally don’t have much appeal to American watch collectors.  They prefer “railroad watches” which is a whole topic into itself.  However, this watch is an exception.  It meets all of the criteria for a so called “railroad watch” with the exception of the size – it is too small to be classified as such.

The case is 14K yellow gold, the dial is stirling silver and the hands are blued steel.  It’s a beautiful timepiece.  But what I find most interesting about it are the parts that very few people see.  The entire watch is is engine turned or what for American and some German watches is known as damascening.

Here is a picture of the assembled movement in the watch: 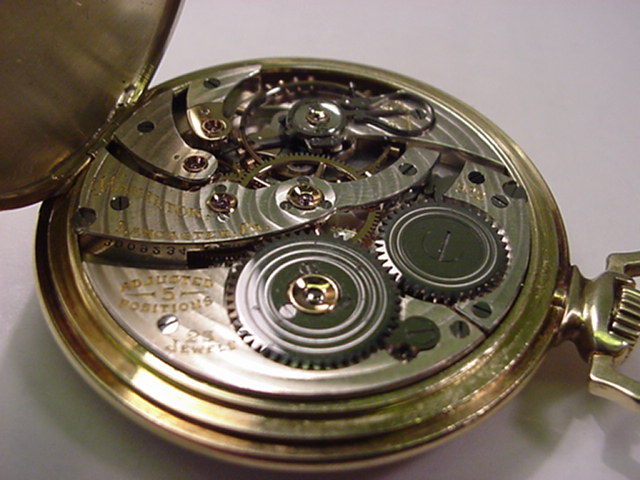 And now for the interesting bits!  This is the “plate” on which the watch is assembled. 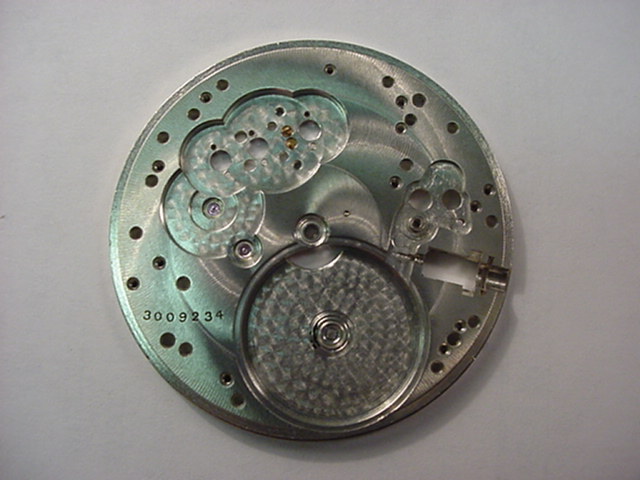 Notice all the wonderful engine turning.

Here is the other side known as the bottom plate which is actually the hands side of the watch: 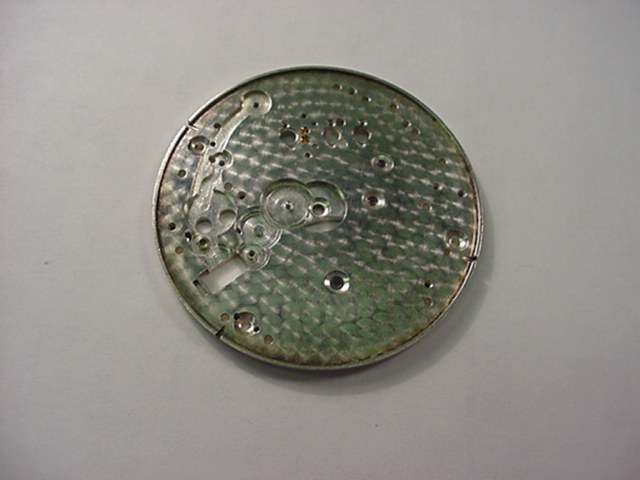 The bridges go across the top plate: 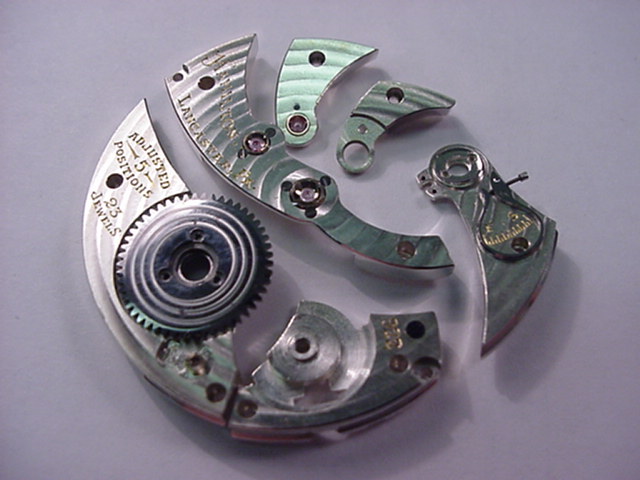 Those are “genuine synthetic” rubies set in gold that give watches their “number of jewels”.  In this case 23 jewels and the watch is manually adjusted to keep time in 5 positions.

These are gears of the watch known in the trade as the “wheels”: 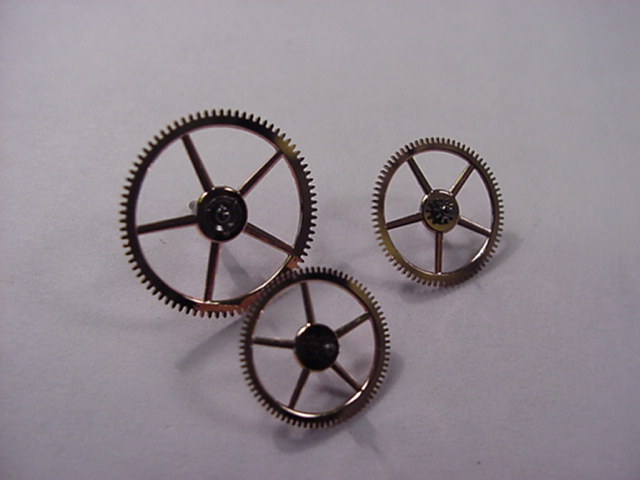 Watch wheels are almost exclusively made from brass, but in this case they are made from real gold.  The reason for the material choice was partly because of the metal’s softness, but mostly because of aesthetics.

Here is the heart of the watch – the balance wheel: 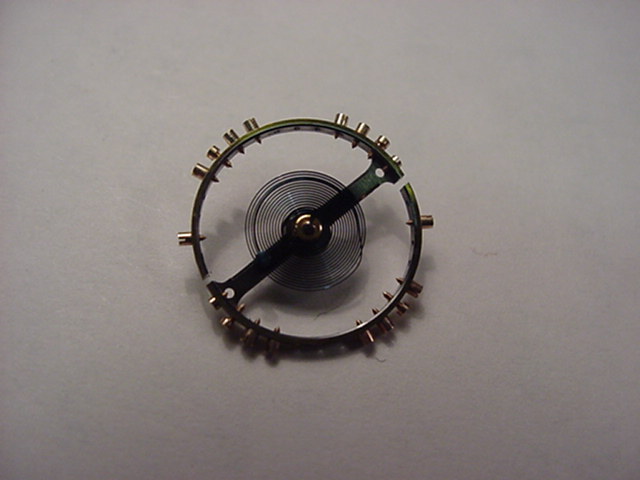 This is an old fashioned, blue steel spring, split bi-metallic balance wheel.  The screws on the outside are there to balance the wheel.  Naturally they are gold as well!  Because the wheel is made from two different metals the diameter will change as the temperature changes.  This is how the watch keeps accurate time when the temperature changes.

Modern mechanical watches are laser balanced and use a proprietary white metal alloy hairspring that compensates for temperature. The balance wheel in your modern Rolex is a solid piece.

Here’s a beauty shot of the the assembled movement out of the case: 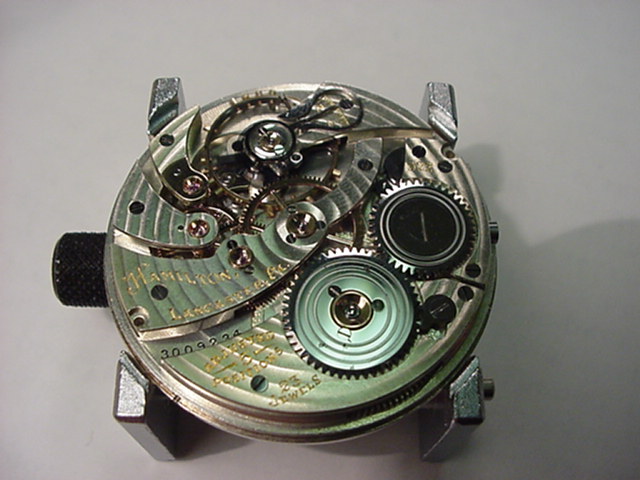 And here is the sterling silver dial which is interestingly stamped “Switzerland” on the back: 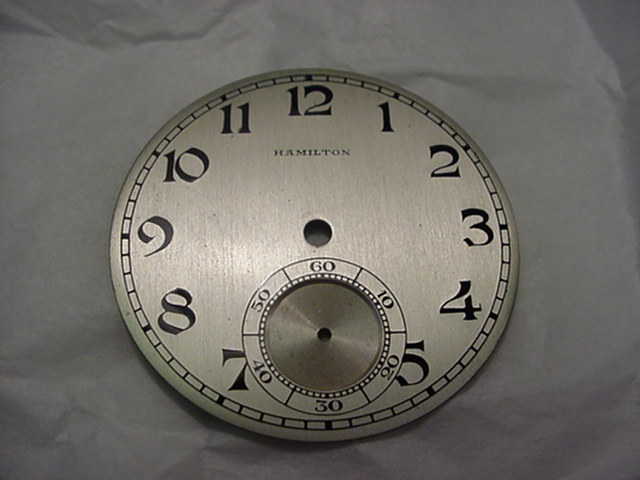 And finally the cased watch.  Notice this has essentially two “backs”.  It has a hinged dust cover for the just the movement itself and another cover for the back of the watch. And naturally they are both made out of 14K gold! 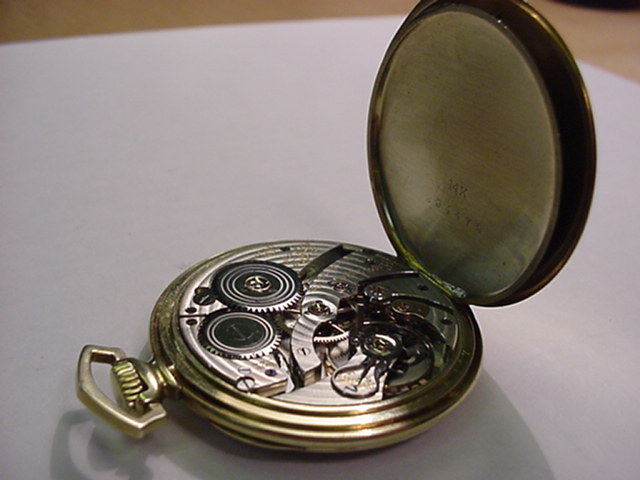 As I don’t often wear suits to work anymore I don’t carry this watch much anymore.  I guess I’ll have to find an excuse to wear it again.

NY Jets at Cleveland (-3) Starting off with a tough one. Cleveland has been showing some cojones this season, but…