Scenes from a Wasteland: Ground Zero for the Carnage of the Government Shutdown

After barely surviving the immediate fallout of the government shutdown, Baby Trshmnstr and I braved the post-apocalyptic wasteland to see if the Starbucks gift cards still worked. On the way, we passed by ground zero, one of the hardest hit places in the world by this tragedy… a National Park. Specifically, Manassas Battlefield National Park.

Blood stained these grounds a century and a half ago, and we honor the loss, but this park will now have new historic meaning as the Bull Run ran red with the life essence of the millions who have died because of the government shutdown.

I originally thought that I had captured an image of a valiant National Park Officer shielding the gawkers and rubberneckers from the unimaginable horror that lies beyond the main entrance. Upon further inspection, it was an evil libertarian trying to pillage the piled up bodies for gold and for survivors to put to work in their salt mines. Thank God for the gate blocking their way! Some heroic government employee must have put it in place prior to dying from lack of funding. 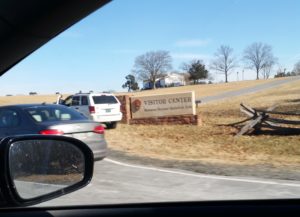 The evil libertarians are at the gate!!! They’ve failed to get in, but they’ve succeeded at blocking my picture of the gate!!

We trudged on: me, the less than loyal dog, and the only-partially-aware baby. Oh, to view this horror from the eyes of a babe! What a punishment! A sentence worse than death: to grow up and live a shell of a life surrounded by death and rot! And all because the damn Republicans shut down the government!

We continued to what was once the field hospital, where the wounded were once brought to be hacked up or to be released into the sweetness of death. However, through the wanton cruelty of the Trump, the casualties of today’s Civil War weren’t even given a chance. Only a few straggling survivors were able to make it to the field hospital to revive the building to its most glorified use. The well that once was polluted with the severed appendages and disfigured tissue of battlefield casualties is quietly empty today, the few survivors too disoriented and delirious from the mass gore and violence of the GOP assault. 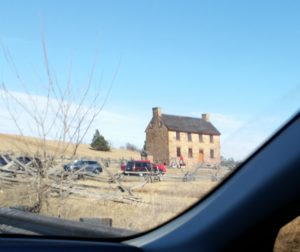 Oh, the poor survivors! Nowhere to go, no civilization to return to! They’re left, like the beasts of the plains, to die nameless and without dignity in this new dystopian reality!!

We finally passed by what was once a gathering place for schoolchildren and other lovers of learning to gaily frolic from historical monument to historical monument. Horses would gallop by and athletes would perfect their fitness in a small utopia built up on government land. Now, all that is left at this alternate entrance to the park is a bevy of burnt out automobiles, husks left from a happier time.

As we drove past this monument to unspeakable violence, choking back tears and vomit, it struck me how this park would look in a far away future, once this turmoil has passed. Much like the neatly lined cannons and artillery pieces that adorn Henry Hill not more than half a mile from this place, a future monument to this oh so frivolous act of hatred will show these destroyed cars lined in neat rows, scorched by the hatred of this nation’s Hitler. 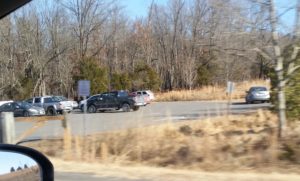 Why is there sometimes a perverse beauty in violent death? What draws the eye to such destruction?

I part with a single thought. As I gaze into the cruel face of government shutdown, I see that the struggle is finished. I love Big Brother.

Monday? Is it still only Monday? I worked until about 3am (to be fair, I didn't really get fired up…

Sorry, Minnesodans. It was a good run, but that was a tough way for it to end.  And sorry to…