The Review Where I Mess With Texas

I am going to write something controversial.  I am fully aware of what I am about to write, is probably going to result in the very least, being pelted with rotten cabbage.

This is my review of Shiner Holiday Cheer. 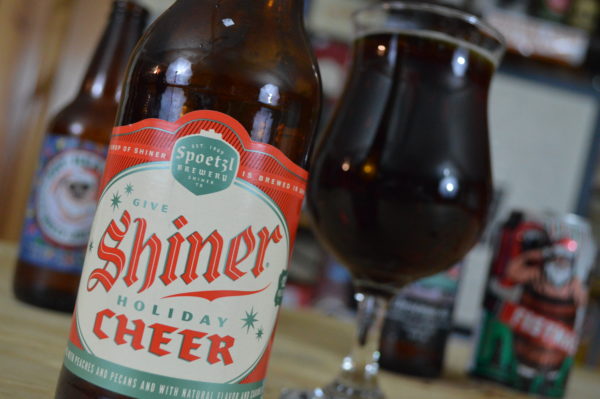 What is so controversial about this particular beer….I’ll get to that.  You see, I don’t particularly care for Shiner or as the brewery is officially know as Spoetzl Brewery.  This is awkward coming from somebody that happens to like Bocks.  I just don’t think Shiner is that great, to be honest.  I will have my AR at the ready while this is active, because this be fighting words.  People from Texas just love this stuff.

Spoetzl Brewery to it’s credit does have an interesting history.  Like many large breweries it was founded by a German Immigrant:

Kosmos Spoetzl, a German immigrant brewmaster, learned of the Shiner operation and coleased the facility with Oswald Petzold with an option to buy in 1915. Spoetzl had attended brewmaster’s school and apprenticed for three years in Germany and worked for eight years at the Pyramid Brewery in Cairo, Egypt, before moving to San Antonio in search of a better climate for his health. He came, carrying the recipe for a Bavarian beer made by his family from pure malt and hops. Within a year Spoetzl bought the brewery, which he renamed the “Home Brewery,” and began to produce beer in wooden kegs and bottles. After 1916 the beer was packaged in glass returnable bottles; aluminum kegs were first used in 1947, nonreturnable bottles came in 1958, party kegs in 1964, and cans in 1970. When Prohibition was declared in 1918, Spoetzl produced near beer, ice, and, according to some sources, regular beer as well. During this period, he sustained the brewery by doing construction work in Florida with crews and trucks brought from Texas. After his wife’s death in 1921, Spoetzl considered returning to Bavaria but was convinced by his daughter to retain the business. “Miss Celie,” as Cecilie was called, served as business manager of the firm, and her daughter Rose joined the firm in 1964. August Haslbeck, who served as brewmaster, was the son of a noted Bavarian maltmaster and Spoetzl’s nephew. He later returned to Germany to complete an apprenticeship and receive a brewmaster’s degree. With repeal of Prohibition in 1933, the business resumed, with the introduction of “Texas Export,” a new product later known as “Texas Special” beer. Sales were made within a 100-mile radius. Over the next decade the company added a new bottling room and brew house, and in 1947 Spoetzl constructed the white brick Alamo-style plant still in use today.

The first time I had Shiner Bock, it was probably the only one available not made by what was then Anheuser-Busch.  It was okay but as I drank more beer, including actual bocks from Germany, I realized there was something missing.  I don’t know what it is, but I’ll just focus on the basics.

The last one I think is where it falls short.  While it is carbonated it dissipates so quickly that I feel like I am just drinking flat beer.  It’s like opening a beer, telling yourself you will finish it later and putting it back in the fridge.  When you get back to it, its just not the same.  It is this feeling except I just opened it.  Now, many Mexican beers have this same quality, except they aren’t necessarily pretending to be something their not.  Then again, Shiner Bock is what it is, take it or leave it.  I’ll accept it if offered, but I am not about to buy it.

Not my photo, nor am I participating in this particular parade.

I have had several of their varieties while I was TDY at Sheppard AFB, near Wichita Falls, TX.  The liquor store in town had quite the selection of all their varieties and since I was in my 20s and quite frankly stuck in Wichita Falls for a month…I had what is in hindsight, a disturbing amount of beer while getting hotline certified on overhead power lines.  One that does stand out in my opinion from Spoetzl is their Czech Pilsner.  While it may seem like faint praise, this is actually quite good and should I actually find it in Arizona, I might be inclined to buy it.  Unfortunately, I only ever see Shiner Bock.

So how it Holiday Cheer?  Same as the rest of them, which is pretty flat.  Also it is very fruity, perhaps not in a good way.  Last year (yes, I’ve been doing this over a year now)I reviewed a holiday ale that was also fruity but it had significantly more body, and the malt complexity went well with the fruitiness.  This one is just sweet, so I slammed it down, and opened an amber ale.  Shiner Holiday Cheer:  2.5/5

Happy Last Weekend of 2018, Glibs! (LAST weekend, not LOST weekend. YMMV.) I was super happy to check in on…

Saturday Morning Links from the Land of Lincoln

We have snow outside. Not much, but a dusting. I warned the Wonder Dog that she may not see…