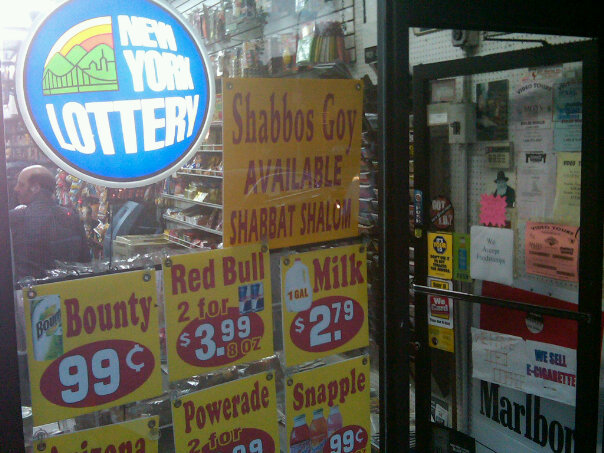 There’s a concept in Judaism you’ve likely heard of called “shabbos goy.” And here’s the background to understand that concept.

In Judaism, the five books of Moshe (Torah) are supposedly IT, the words and deeds of Yahweh, directly. And the laws of Yahweh. As I’ve talked about in other Jewsday posts, over time Pharisaical Judaism arose, wherein each word and phrase in the Torah is subject to tortured analysis and a lot of new rules set by rabbis. Curiously, those rules often seem to benefit certain people, as well as establish the power of rabbis; the kosher laws are a perfect example, with varying interpretations and complex new (compared to 2000 BCE) rules in force creating much opportunity for inspection and certification firms, not to mention rabbinical counsels. Here’s an example: the Torah says that the meat of a calf cannot be cooked in its mother’s milk. Generations of Pharisaical rabbis have turned this into a complex set of regulations requiring two sets of dishes, strict separation of any dairy product from any meat product, ritual purifications, and true biological weirdness (think of how dairy and beef are raised in the modern world). The Jews who feel that the Torah says what the Torah says, and fuck rabbis trying to complexify it and work out loopholes, are referred to as Karaites and are a minuscule minority.

I think some parallels are familiar and striking.

In any case, Pharisaical thinking resulted in the institution of the shabbos goy, a non-Jew hired to perform labor on the sabbath that Yahweh forbade Jews to do. But it’s a typical rabbinical workaround, interpret the sabbath as benefiting and binding on Jews, then rule that it’s OK to make some goy do your work for you, but with a whole set of rules and loopholes around that as well. And don’t get me started on how the rabbis have interpreted the word “work.” Here’s an example of the reasoning of one orthodox Pharisaical school of thought, just so you can get a flavor of how convoluted and ridiculous this shit is. So an orthodox jew (who can’t operate light switches on shabbos) can’t say to the goy, “Please tun on the light.” But it’s A-OK for him to say, “It’s dark in here,” and the goy will then know to turn on the light. See, we have the rules worked out!

So here it is, the goy holiday, and you guys don’t have a word for the opposite of a shabbos goy, me. A Noel Hebe? Well that’s OK, you deserve a day off and it’s going to be a slow day here anyway.

After nodding to the wonderful Glibertarians’ Christmas Tradition, let’s do birthdays and links.

Now on to the news.

Progs love to talk about the death of the middle class. And they’re right. But of course, the cause is… Prog policies.

A news story with much interesting (((sociology))) in it. And a good flavor of why the orthodox are highly unpopular in Israel, yet most are afraid to buck them.

For years, I have had a set of rules about movies which generally works for me. One of them is, “Any movie by Robert Zemeckis is going to suck donkey balls.” Apparently, I was ahead of the curve.

Why is hockey so violent? Is it the pent-up rage in Canadians? The effect of puck fumes on the human brain? Or is skating itself inherently violent?

More Trump-inspired antisemitism. Wait, what? But it’s OK, his career is in no danger because of the Grievance Pyramid.

Commie Pope is commie. This is my shocked face. All yours, Catholics, hope you’re enjoying it.

Team Blue continues to eat its own.

Why anti-war folks like me are warming up to Rand Paul. The Left is, of course, appalled and are doubling down on their newly-found war boners. Hey, y’all are welcome to volunteer to go fight whatever war you want; you DID say that if Trump won, you’d leave the US. Here’s a way to feed two birds with one scone.

As much contempt as I have for Jerry Brown, at least he seems actually concerned with criminal justice. Kudos, and I wish every governor was as concerned with making sure that that people in prison are actually guilty rather than procedurally guilty.

OK, which of you is this? Fess up, you’re among friends.

How can anyone think that corporate welfare is inherently corrupt? The Tobacco Commission????

Old Guy Music today is my favorite Christmas song. SP tells me, “You’re putting up too many Jeffrey Foucault songs. People won’t click them.” This is a brilliant song, so please prove her wrong. I get chills every time I hear it and think about the wonderful poetry.

Dark is the night, cold is the ground
The armies march out to defend
And the Ghost Repeaters of the revelators
Are singing “Peace on Earth and Good Will to all Men”

As we are in Midwinter, give or take, the festival of the Saturnalia is upon us, and such the sound…

The Reason for the Season