So, I’ve run a couple of these BIF’s, and here’s the shipment that I received in the most recent one: 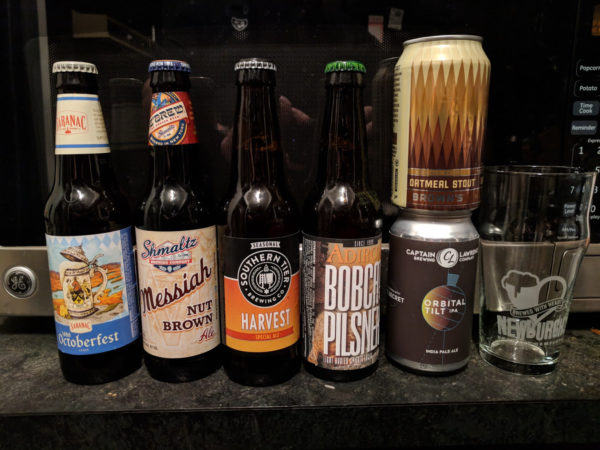 A nice new nonic glass, and several new to me beers. 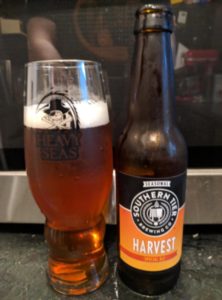 Let’s start with one I’ve had before, but still enjoy.  Southern Tier Harvest Ale: Nice citrus hop aroma, with an undertone of tannin.  Very pale, small head, and moderate carbonation in the appearance of the beer itself.  But the flavor is there, sharp crisp hop tastes slowly fading away. I really wish this was available year round. 3.8/5 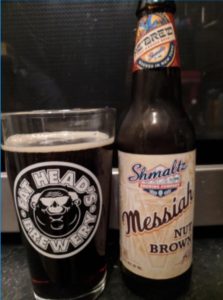 Moving on to another one that had a great old ((ad)) campaign, formerly known as just He’Brew Messiah: Sweeter aroma then the ones I usually go for, a slight hint of hops hiding behind a caramel/nutty aroma.  Pours a dark reddish-brown, with a fluffy white head. Yep, there’s the nutty notes, and just a wisp of hops lurking behind it.  A drinkable beer, but not one I’ll be going for again. 3/5 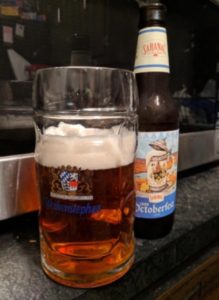 On to the new to me beers.  Saranac 1888 Oktoberfest: Pours a clear golden-copper with a full white head. Aroma is a touch of caramel and biscuit, with some earthy notes. Flavor is not as sweet as some Marzens, with just a kiss of caramel. There’s some earthy and spice notes from the hops in the finish. 3.68/5 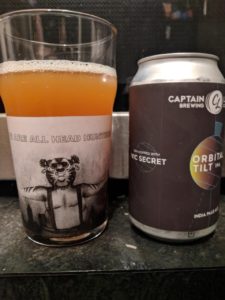 Orbital Tilt: Vic Secret: Big bright citrus hop aroma, with some mango underneath. Pours a nearly opaque orange with a dusting of white head. A touch of caramel sweetness starts off the beer, which then rolls into pine, pith, grapefruit, and a touch of sweet mango. This fades away leaving a long lingering bitter finish. Rich mouthfeel, with just enough carbonation to keep it from getting cloying. 4.24/5  One of my favorite from the batch. 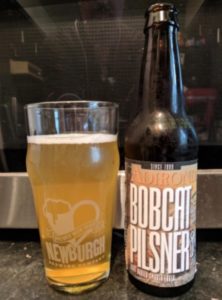 Light crisp aroma, with a touch of noble earthy hops. Pours a mostly clear pale straw with a quickly fading white head. There’s a touch of malt sweetness, which fades to a mild earthy bitter finish. A light body, and nice carbonation keeps this an easy drinking pils.  3.67/5 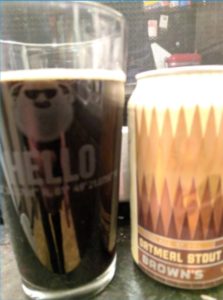 Brown’s Oatmeal Stout: Pours a clear dark ruby with a dusting of light tan head. Rich roasty aroma, with a touch of coffee in the end. Slick mouthfeel, with a fullness from the oats. Starts with a slight note of milk chocolate, which fades to roast, with a touch of acrid notes in the finish. Not enough to be overpowering, but enough to be noticed. Overall, a solid Oatmeal Stout. 3.62/5

I hope you all have enjoyed hearing us geek out about beers, and feel free to jump into the next BIF (currently scheduled for late April/early May, unless someone else wants to run one… hint hint).

By DEG (who Kinnath shipped to): 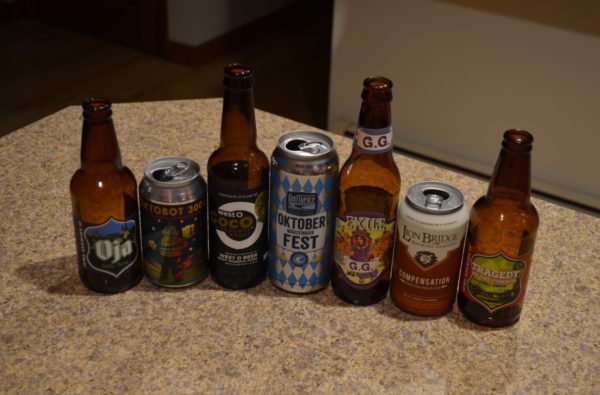 Thanks to Kinnath for sending some good beers.  My ratings are simple:

Oja from Iowa Brewing – An excellent Baltic Porter.  Rating: Would.

CoCo Stout from West O Beer – A Milk Stout with Chocolate.  Quite tasty, and not enough lactose to send me running to the toilet.  Rating:  Would, but only in small quantities.

Oktoberfest from Confluence – The only problem with this beer is I didn’t have enough to fill a Maß.  It is competitive with some Märzens I had at the Wiesn.  Rating: Would.

G. G. from Exile – A dunkel lager.  It was flat, but still rather tasty. Rating:  Would Not unless they fixed the carbonation.

Compensation from Lion Bridge – An English Mild.  It had a nice roasted, malty character.  Rating: Would. 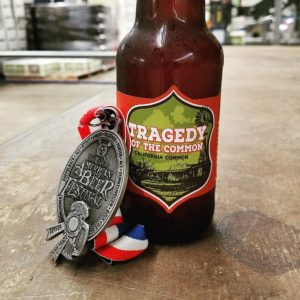 Tragedy of the Common from Iowa Brewing – Beeradvocate shows it as a California Steam Beer but the label says it is an Amber Lager.  The name made me laugh at a time I needed it.  I just got home from traveling for a funeral, and my BIF box was waiting for me when I got back.  I saw this bottle’s label and laughed.  Rating: Would.

I’ve been unwell the past few days, so I’m going to keep this short and sweet, just like me. ;)…

Saturday Morning Links It Is

At my age, hangovers are no laughing matter, and I'm paying for getting bombed. Not that this will slow the…