Do I live in a Blue State Now?

Floating around the ether recently is the idea that Arizona is no longer what is known as a “Red State.”  This is not really a new concept, as the media has discussed this since Bill Clinton won Arizona’s electoral college votes when he was reelected in 1996.  Back then, they cited the state’s changing demographics. I touched on this a bit in my review of a Cream Ale, citing a study from the well regarded W.P. Carey School of Business at Arizona State, the majority of people moving to Arizona for better or worse are from California. 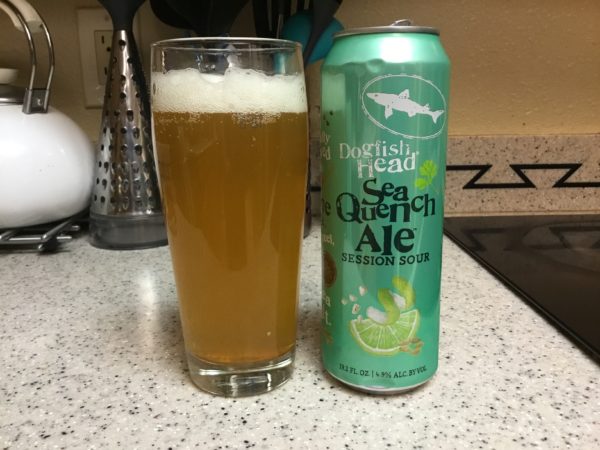 So does the election of Krysten Sinema spell the beginning of the end?  Maybe, maybe not.

A pretty good post-mortem of this election can be found on Ricochet.  Jon Gabriel makes a pretty good case that Sinema won primarily because she ran a more positive, aggressive campaign, and was better known in Phoenix.  While McSally being the representative from Discrict 2, which splits Tucson, was not as well known in Phoenix where the majority of the state lives.  She also focused on portraying Sinema as the annoying girl shrieking into a megaphone outside the student union—yes, well all knew that was her, thanks.  Simply put, when half the population of the state does not live in the metro area you represent, and over half of that metro area will not support you, you might be at a disadvantage. 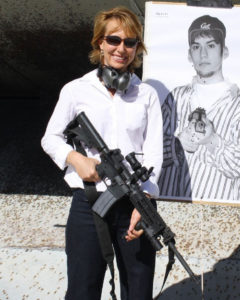 You WILL turn in your guns, so I can play with them.

I can see this being from Phoenix, because until somebody attempted to assassinate her, I didn’t much know anything about Gabrielle Giffords—other than the photo of her with an AR-15. 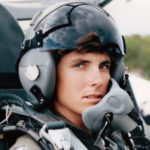 Then there was the part that McSally reminded everyone of John McCain or if you are a conservative, worse than that,  Let’s face it, she’s also a retired fighter pilot, a squishy moderate, and neither endorsed or condemned Trump in 2016.  They both even have Mc in the name.

Let’s look at the election numbers themselves.  As I wrote previously, while there are certainly a few shenanigans that I would like the state to investigate, these wouldn’t have affected the outcome all that much, therefore I still do not believe there is much evidence of voter fraud.  That said, as of 14 November, the statewide elections break down like this: 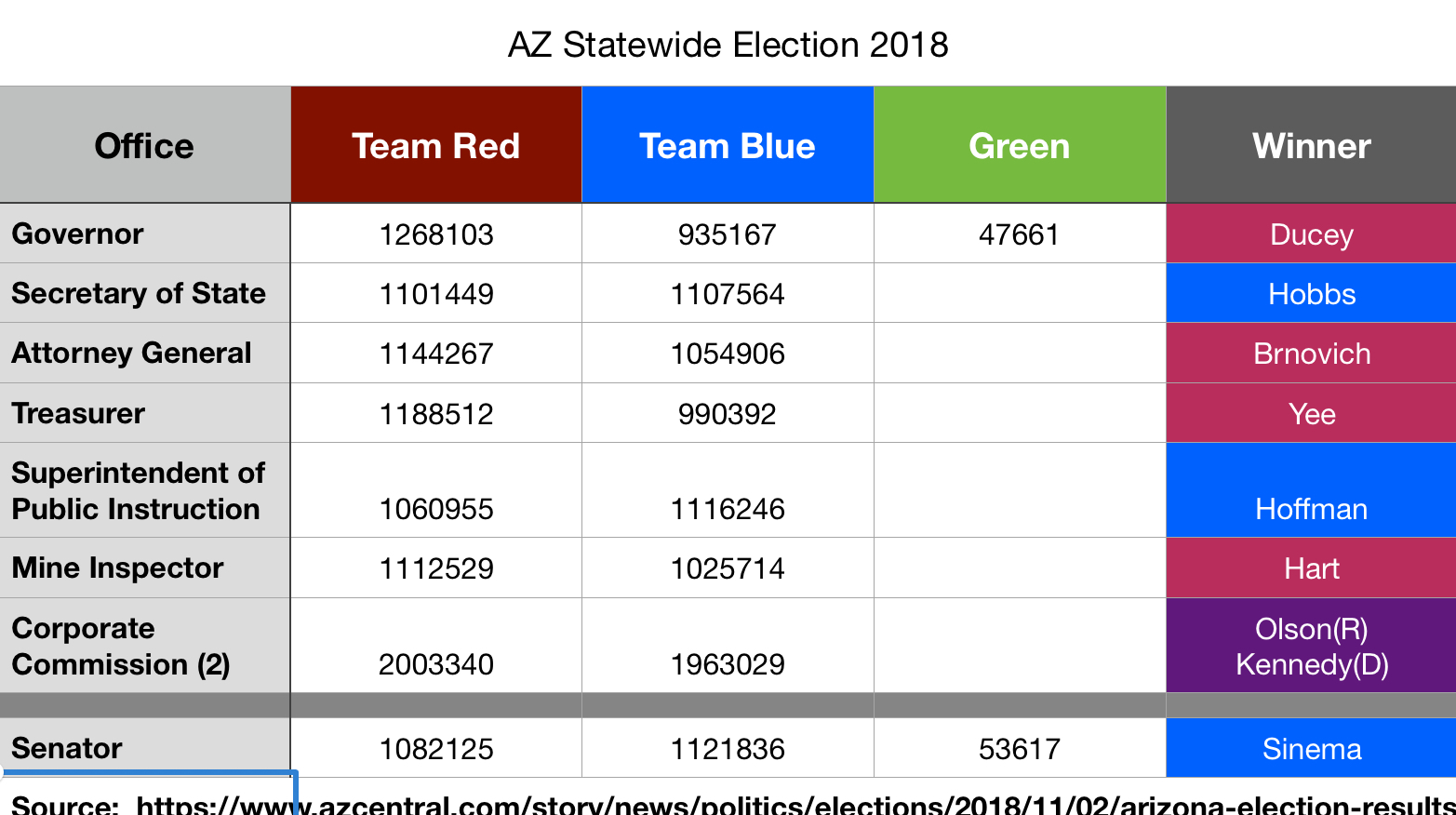 The State Legislature and House Districts break down like this: 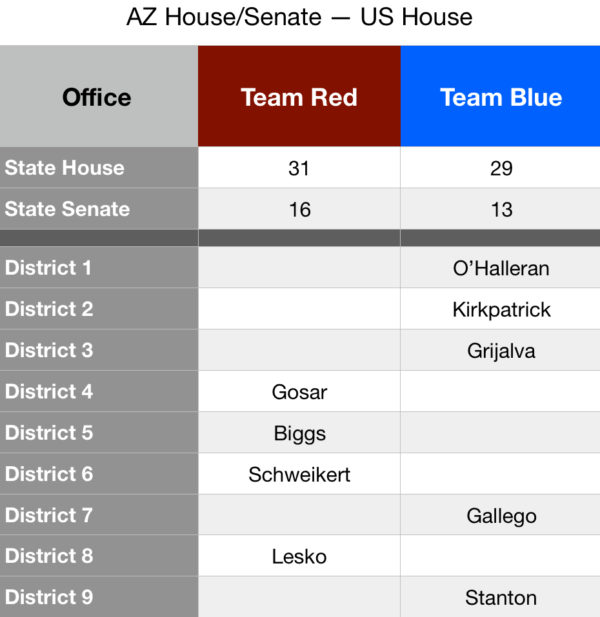 First off, note the lack of a Team L candidate for any of these races.  The one that ran for governor, Kevin McCormick, did not get enough signatures to get a name on the ballot.  I reached out to his campaign in the summer, to see what he was about, ask a few questions, and distribute his answers appropriately for the lovely people of this site to tear him apart.  Sadly, he declined.

Where we get to have some fun with the numbers is here: 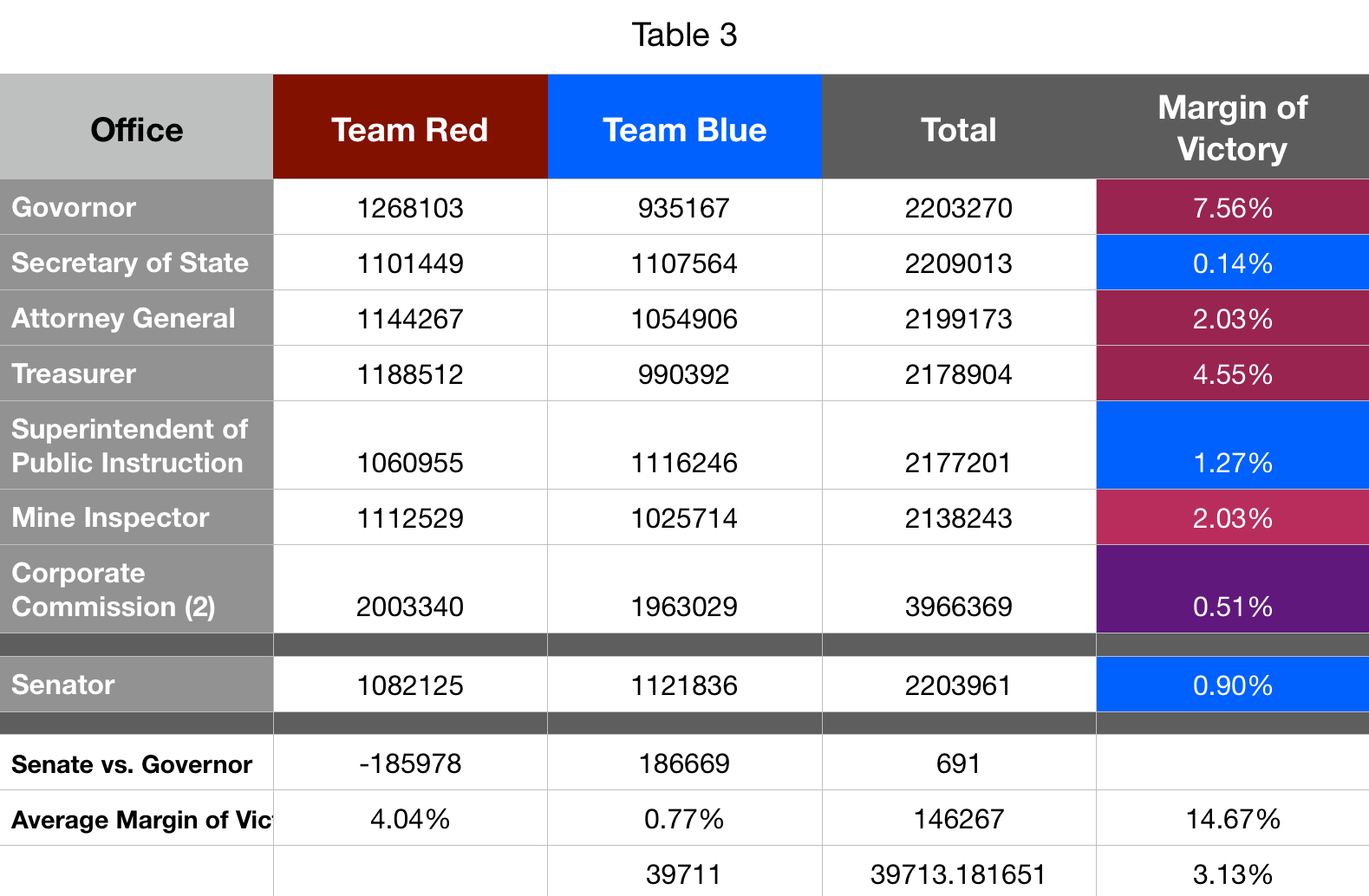 One thing that initially popped into my head was perhaps a significant number of team red types voted Doug Ducey for governor and declined to vote at all in the Senate race.  This is wrong, as it only accounts for 691 voters. My next thought was the difference between Ducey’s total and McSally’s, just to get a grip on what the damage is. That is -185,978, a difference of 14.67%–okay fair enough.  If we divide the margin of the Senate race by the total number that voted for Ducey, we get a percentage. 3.13% to be exact. That is the percentage of voters, otherwise happy to vote for team red in the Governor race, McSally would ultimately fail to convince to vote for her.

Looking at the other statewide races we see when team red won, they won by a fairly comfortable margin.  Where team blue won, they won it by a nose. An average of 4.04%, to .77%, respectfully. The legislature did not flip either.

With regard to the house elections, it could be a combination of the typical increased turnout of the party opposite the one in power nationally, name recognition for Greg Stanton as he is the mayor of Phoenix and the district he won is primarily in Phoenix, and Anne Kirkpatrick being well-known from her failed attempt to unseat John McCain in 2016.  Plus District 2 is made up in part from a district Kirkpatrick formerly represented in Northern Arizona.

For all this talk about changing demographics, one would think somebody would ride Sinema’s coattails.  While you might say Hobbs may have received a favorable bump, a team blue candidate winning a downballot seat is not that uncommon in Arizona either.  Personally, I voted for Hobbs, as I typically vote that candidate for secretary of state from the opposite party I vote for governor—gridlock is a good thing.  If it were turning blue, perhaps a few progressive measures have passed in the last ten to fifteen years?  None come to mind, but feel free to dig around and prove me wrong.

But what has passed? Constitutional Carry, and Occupational Licensing reform are the first that come to mind.  There are even a few that come to mind where team red arguably went too far that I will not link to, but I bet you heard of them.

So is Arizona a blue state?  Maybe, maybe not.

Is this beer any good?  I actually tried this multiple times to try to be objective, it really isn’t.  Its salt and lime, like a margarita, but without the class.  If you like sours, I’m sure you will like it just fine.  Dogfish Head Sea Quench Session Sour:  1.5/5.

Well, Thanksgiving has come and gone, and now we are hard into the shopping festive season. I hate shopping forced…

It's futile to try to exercise off the excess caloric intake of the past few days, but Yahweh help me,…