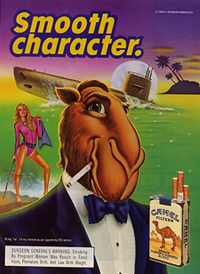 I started smoking somewhere around the age of 14. My dad smoked, his three brothers smoked, it just seemed like the right thing to do. I started with Camel Lights and moved on to Winston, because it tastes good, like a cigarette should. Even early in high school, I was known as the heaviest, most constant, and most consistent smoker around. I was buying cartons by my senior year. By the time I reached college, I would go through 5-6 packs a weekend during my sessions of binge drinking. And all that was without sharing, I didn’t bum to people, I hate bums. Get a damn job and buy your own smokes you leach. And I never tried and had no plans to quit. I loved smoking, let me repeat, I loved smoking! Besides, it just takes the shitty years off the end of your life.

Somewhere around 2008-2009, smoking started to look a lot less glamorous to me. I was fine with idea of getting lung cancer. Lung cancer usually kills you quick. While I don’t prefer it, at least it won’t ruin your life for years. My fiance (at the time, now ex-wife) had a grandfather with COPD. That’s what really changed my mind. Watching the misery he went through was enough for me. I hearkened back to the asthma I outgrew during my childhood. I remembered what it was like to not be able to breathe. I decided I didn’t want that feeling ever again. 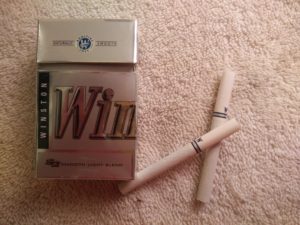 A pack of Winston S2’s I recently found in my old hiding spot at my parents house.

I didn’t know anything about e-cigs at the time. So I tried to switch to dip. I had done it a few times in college; it really wasn’t my thing. But, I’d rather lose my gums and jaw than not be able to breathe. Grizzly Mint Long Cut was semi-successful. I was smoking less, but I certainly hadn’t quit. I was probably down to a pack or so a week for about 6 months. I went back to cigarettes, nearly exclusively, at the funeral of the man who was my inspiration to quit (the grandfather).

Right around this time I had moved back in with my parents again while saving for my wedding. My brother, a lover of gadgets, had ordered my dad an electronic cigarette from some company online, I scoffed at the idea. But my father, who had never tried to quit in his life, decided to give it a go. He had one “analog” cigarette three days after starting the electronic and was disgusted with how it tasted. That was 2010, he hasn’t smoked a cigarette since.

He told his bothers, all lifelong smokers, about it. 2 of the three switched with him. Now after a month or so of their success, I decided maybe it wasn’t the snake oil I thought it was and maybe I should give it a shot. These were the earliest days of vaping. The only shop in town that sold this stuff was actually a rare coin shop. The owner of the shop had started vaping and after his success he decided to start selling it out of the coin store. I bought my first ego 510 and I was off to the races.

I was amazed at how well it worked. It didn’t taste exactly like smoking, but it was close enough. It mimicked the motion and movement. It produced the visual effect. Most importantly, it kept my nicotine receptors happy. Also, I can’t begin to tell you how much better I felt. I could breathe and I could breathe well. It only took a few weeks for my smoker’s cough to vanish. It was amazing. The other thing that I really like about it was that I could cheat. When I was drinking with friends, I’d have a smoke or two. The next day, I was fine with going right back to vaping.

The technology changed incredibly rapidly during those first couple of years. In the early days you actually put a few drops on some poly-fill stuffing and held it up to the atomizer. It burned the poly-fill often and tasted awful when it did. Tanks came out next. Variable voltage after that. Then sub-ohm atomizers, variable wattage, stainless steel coils, etc. The products out there today are vastly superior to what I started out with. 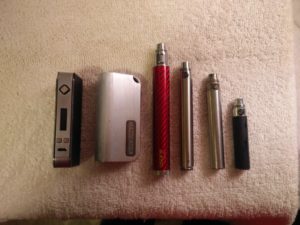 An array of the batteries I’ve used through the years. On the far right is the Joytech ego 650mA. As the got more advanced they got bigger. The one on the far left is the Innokin Cool Fire IV with variable voltage/wattage up to 100 watts.

After the first couple of years of vaping, I actually stopped using tobacco flavored juice. That was a big step. And when that happened, I realized I wasn’t addicted to cigarettes any longer. I was actually more addicted to vaping than I was cigarettes. I still cheated occasionally (especially while drinking or hanging out with old smoker buddies), but it became less and less as time went on. About two years ago, I realized I really didn’t like smoking anymore, not even my occasional cheat. So I stopped real cigarettes altogether.

Finally, about a year ago, I started questioning if I should try to quit vaping. Like cigarettes, I had never planned to quit. I actually thought I’d vape until I die. But, I started to worry about impending FDA regulations. I was concerned how much it was starting to cost (Indiana regulations drastically increased the price). And with more FDA regulations, the price is only destined to get higher.

I started taking Wellbutrin (aka Bupropion or Zyban), a prescription quit smoking aid (and anti-depressant). I could tell when I first started taking it that I cared less about my nicotine addiction. About two weeks after starting it, on January 28th, 2018 I stopped vaping and all forms of nicotine. I haven’t had any since. Truthfully, after just a few days, almost all of cravings had subsided. After about 6 months I stopped taking the Wellbutrin. I very rarely crave nicotine at all anymore, and when I do it passes almost instantaneously. I really have no desire to ingest it in any form anymore.

It was about an 8 year journey for me to quit nicotine. I think that using the dip actually helped me to start to break my habit. Then, the e-cig saved my life. They are a life saving device. If you smoke and you want to quit, give it a shot. My father, two of his brothers and countless friends of mine also quit smoking by switching to vaping. It really is a miracle of modern times. The only caveat is that you have to want to quit for vaping to work. But if you do, it might save your life.

As a quick aside, I wrote many smoking related papers while in college. That’s how I found Jacob Sullum’s book For Your Own Good: the Anti-Smoking Crusade and the Tyranny of Public Health. His book led me to TOS, which in turn brought me here. BTW, I recommend the book, I wish there were an updated revision.

The CFP poll debuted yesterday. Bama and Clemson were sitting on top.  Ohio State was being Kentucky and Washington State.…