People need to get up off my shit today. It’s like everyone around me has turned into squalling infants.

Except you, my lovely internet people.

The paid D.C. protesters are now ready to REALLY protest because they haven’t gotten their checks – in other words, they weren’t paid! Screamers in Congress, and outside, were far too obvious – less professional than anticipated by those paying (or not paying) the bills!

The Madness of King Donald. Is he trolling, is he really so paranoid and deluded to think they are all paid (or not paid?)

I am but mad north-north-west.
When the wind is southerly, I know a hawk from a handsaw.

But does he? Or do we merely hope that he can?

Let me take a minute to bitch about SparkNotes. Holy shit, SparkNotes sucks. If you put pretty much any Shakespeare quote into Google, SparkNotes comes up first. (Either they are gaming the system or just paying for the ranking–or maybe Google owns SparkNotes, I don’t care enough to figure it out.)

Anyway, SparkNotes is basically CliffNotes. Now, I’ve never really used CliffNotes, so maybe they are this shitty, but part of what SparkNotes does is give a modern “translation” of Shakespearean English (Heaven forfend anyone expand their vocabulary.) So the quote above is translated by SparkNotes as: “I’m only crazy sometimes. At other times, I know what’s what.”

What? What? You reduce His Words to that?!? First off, even on a surface reading, the lightest surface reading, that is not what Hamlet is saying at all. He’s saying he’s not crazy in a way that makes him seem crazy. And that’s before you get into Elizabethan pronunciation and cliches and double puns. To take a phrase so rich, so layered, so packed with meaning and spin it into grossest dross disgusts me.

And one more, I must do one more!

The fair Ophelia!—Nymph, in thy orisons
Be all my sins remembered.

Becomes, in the cack-handed laziness of SparkNotes:

Pretty lady, please remember me when you pray.

REALLY? Ophelia is the one true innocent that he has destroyed in his quest for revenge, the person he has most sinned against. This is his recognition and apology, even if it is too late. “Remember me when you pray.” Pft. Vile rot. Go to, I’ll no more on ’t. It hath made me mad. 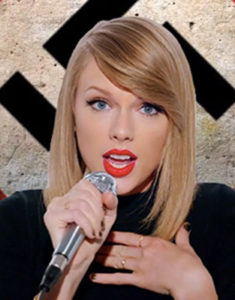 Taylor Swift’s endorsement of two Democrats for the US mid-term elections has sparked a huge response – including from President Donald Trump.

The singer-songwriter, 28, had previously deliberately steered clear of politics but said events in “the past two years” had changed her mind.

Her latest comments were praised by many but also sparked a fierce backlash from Republican supporters.

Swift broke her silence on politics on Sunday, publicly endorsing two Democrats in Tennessee, her home state, in a post on Instagram, where she has 112m followers.

“In the past I’ve been reluctant to publicly voice my political opinions, but due to several events in my life and in the world in the past two years, I feel very differently about that now,” she wrote.

Stormy Daniels, a woman brave enough to speak publicly about the unspeakable act of having sexual intercourse with Donald Trump, now feels bad that she described the president’s Lil’ Smokey as “the mushroom character” in Mario Kart.

In a segment on 60 Minutes Australia, Daniels expressed regret about how she spoke about Trump’s Vienna sausage. “In a way, it’s body shaming and I feel like If I could go back and write the book [again], I think I would’ve left those details out,” she said. 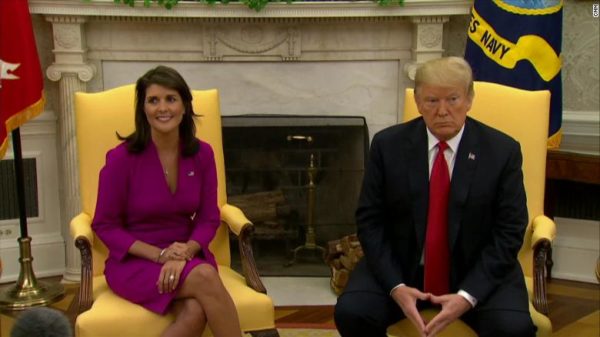 “I assume I’m just supposed to know who this woman is?”

President Donald Trump announced on Tuesday that US Ambassador to the United Nations Nikki Haley has resigned and will leave her post by the end of the year.

Sitting side-by-side in the Oval Office, Trump praised Haley as a “fantastic person” who has “done an incredible job” and said he would gladly welcome her back into his administration down the line.

“She told me probably six months ago, ‘You know maybe at end of the year — at the end of the two year period — but by the end of the year I want to take a little time off, I want to take a break,'” he added. However, a source familiar with the situation told CNN that Haley notified Trump about her decision last week and did not tell Secretary of State Mike Pompeo or White House national security adviser John Bolton.

Both Bolton and Pompeo were surprised by the announcement, a source familiar told CNN.

Officials inside the White House, who had little indication Haley was resigning on Tuesday, are questioning her timing.

Natural Light is to college parties as seedy couches are to college parties. And the beer brand, owned by Anheuser-Busch, totally embraces this with its new 77-pack of cans, available exclusively around the College Park, Maryland area (home to the University Of Maryland).

The limited-edition packaging is a nod to the birth year of Natty Light—1977—and will hit stores in the next few days. A College Park liquor store I spoke to confirmed it would be receiving the 77-pack “today or tomorrow,” and that it would retail for “just around $30.” Our mass-market beer taste test determined that Natty Light tastes “like regular beer that’s been passed through a Brita filter 10,000 times.”

A while ago I wrote about the issues of pragmatism in politics. Planning the second part, I ran into a…