On the side… On the back… On the front…  No Glibs, it’s not that kind of three way we’re talking about.  This particular THREE WAY is a “Contour” watch made by Hamilton Watch Company of Lancaster Pennsylvania for only two years – 1938 and 1939.  It was a massive market failure and as a result is one the more highly desirable watches made by Hamilton because of its scarcity.  The watch sold so poorly that Hamilton bought back all remaining stock from its retailers, removed the movements to re-use them in more popular case styles and recycled the Contour cases. 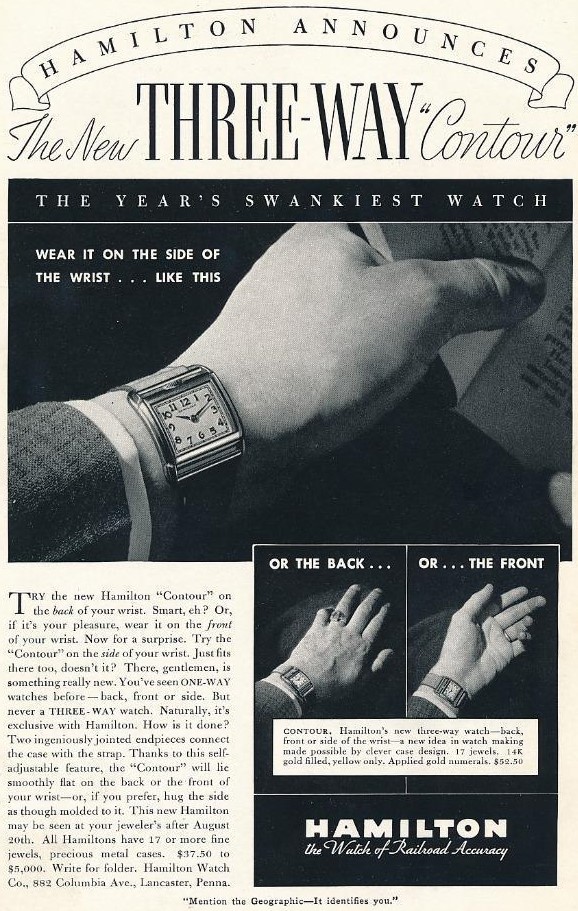 So called “driver’s watches” that could be worn on the side of the wrist became trendy in the late 1930s.  The Contour was Hamilton’s answer this trend.  Hamilton watches were arguably one of the best mass produced watches of the time.  Many would say they are better than anything almost anything of the period except for some limited production Swiss watches.  In terms of massed produced watches the American brands were generally superior to the mass produced Swiss watches of the same time.

For whatever reason it’s also the watch that my maternal grandfather wore.  I’m not sure if he liked the style or simply got a deal on a watch that didn’t sell especially well.  Sadly, I never got the chance to ask him about this particular watch as I found it when cleaning out a closest in the basement after he died.  Fortunately, I was close to my grandfather and we did talk about many other things. 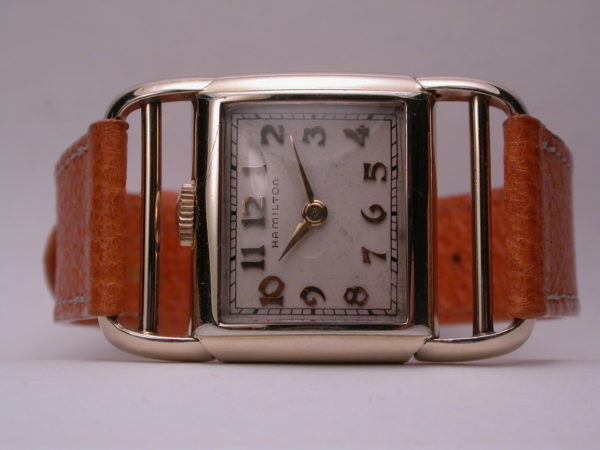 When I found the watch it was missing its band and buckle as well as its stem and crown.  It also had a cracked crystal.  Luckily as a Hamilton collector I had an original stem and crown in my parts collection.  For a band I used a period correct pigskin band with a period correct gold filled buckle.  I was able to order a replacement plastic crystal that you see in my photos from a parts house.  However, later a fellow collector sent me a new old stock original mineral glass crystal after he found out I was restoring a family piece.

The movement in the watch is a Caliber 980 – a 14/0 size tonneau shaped movement that is about 19mm or 0.73 inches in length.  The 980 was commonly used in Hamilton’s gold filled cased watches. 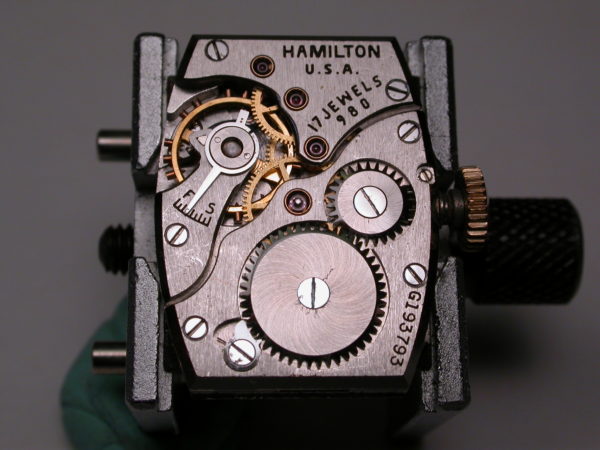 This is the original and correct movement to my grandfather’s watch.  However, for Hamilton’s higher end and solid gold movements they also made a more highly finished version of this movement called the 982.  Functionally it’s identical to the 980, but has more jeweling and finishing.  It is one of my absolute favorite Hamilton movements. 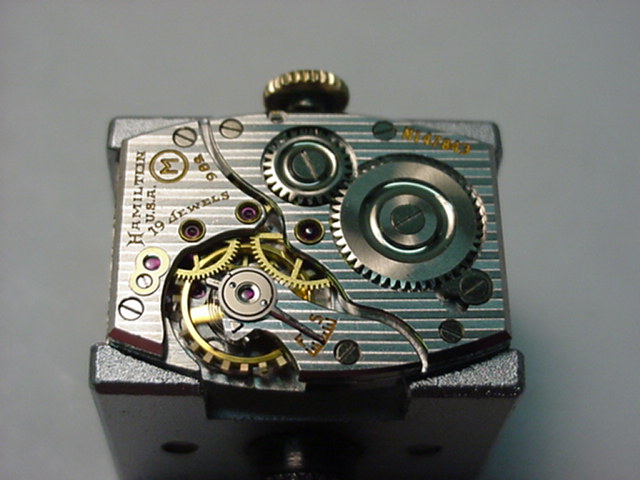 In the old days watchmakers would inscribe the inside of the case every time the watch was brought in for service.  These cases are far from dust proof and the lubricants of the time also evaporated relatively quickly.  As a result watches of the period needed to be serviced every 2 to 4 years.  Here is the case back of the watch. 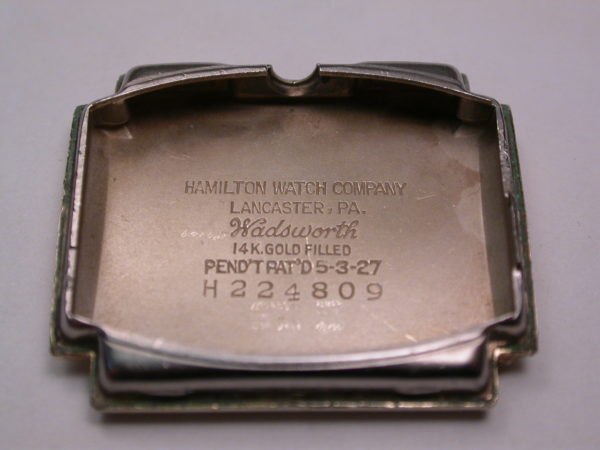 And here is a close up of the service marks: 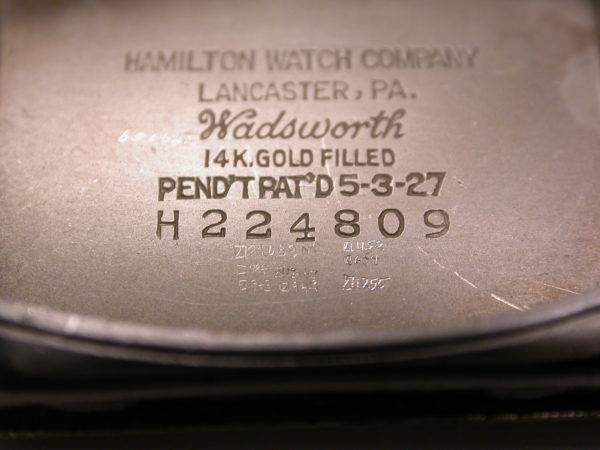 It appears the watch was serviced from 1939 through 1955.  Each watchmaker had a different code and style for service marks so it is difficult to be 100% sure.  Today we don’t scar a watch like this. We use a Sharpie to note the date that we last serviced the watch and remove it with solvent when we clean the watch again.  With modern synthetic lubricants and gentle usage of the watch you can easily get a decade or more between services.

The case is gold filled which means it is made of brass with thin sheets of gold applied to either side of the brass and bonded to it under high pressure.  The thicker the gold the longer it will last, but it almost always wears through on the high spots and the edges of the case.  After a decade or so of usage by my grandfather the corners on the top of the case have worn through.  There is no way to repair it.  Folks have tried to electroplate the cases, but it generally doesn’t work well.  It’s a problem with watches from this era as many case styles were only available in gold filled.  Here is how the case is constructed: 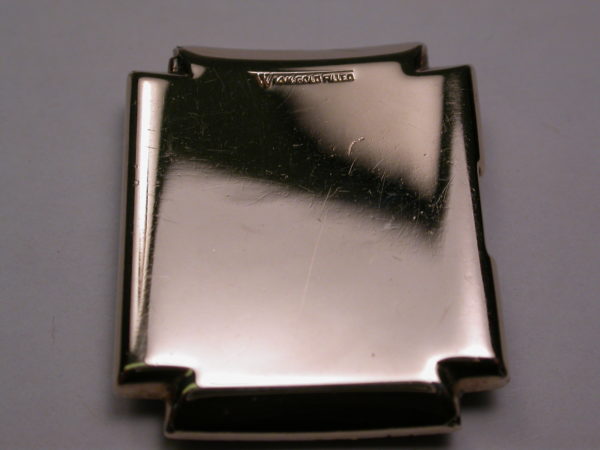 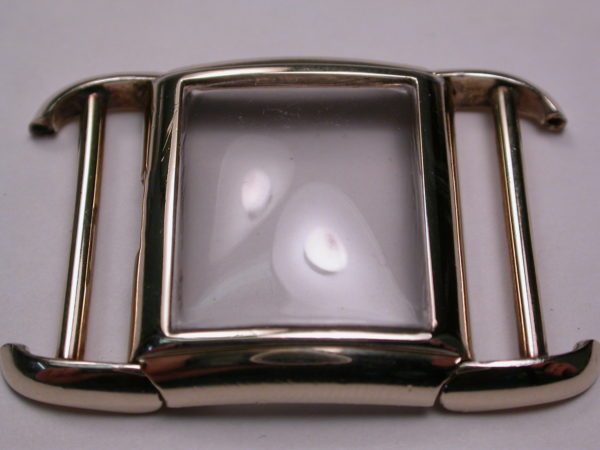 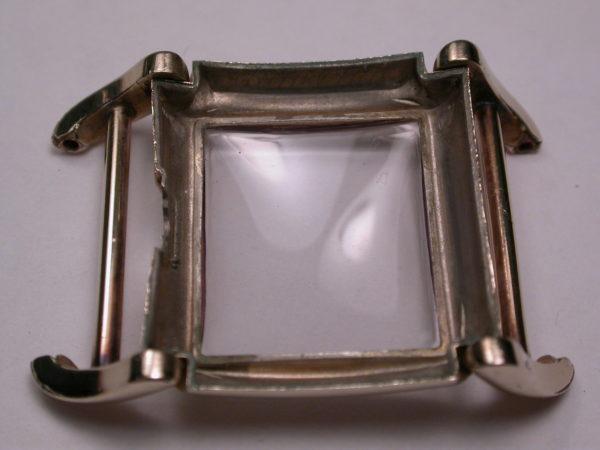 The dial of the watch is made with sterling silver and has solid gold applied numerals. I’ve never gotten a good answer as to what karat gold the numerals are.  The consensus is 18K.   The hands are gold plated.  The dial is one of the most fragile parts of the watch.  There are firms that specialize in restoring dials, but collectors prefer originality if at all possible.  Best I can tell this dial is original, but during routine service of the day it wasn’t uncommon for the dial to be sent out for repair as part of a general service. 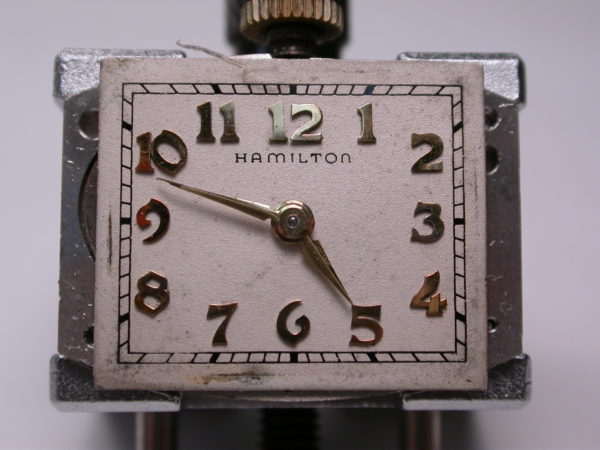 Values for Contours in good condition are anywhere between $500 and $1,000 US.  Needless to say for me, the watch is priceless and is basically the only watch in my collection that I wouldn’t sell.

[caption id="attachment_31803" align="alignright" width="300"] An artist's depiction of last night's game.[/caption] Columbus Day has me thrown off. I had to…

People need to get up off my shit today. It's like everyone around me has turned into squalling infants. Except you,…