I spent the month reading The Complete Chronicles of Conan, a volume issued to celebrate the centennial of Robert E. Howard’s birth. It not only collects the published stories but also the fragments and notes from Howard’s archived papers. The stories are arranged by publication order, my preferred way to read them, and were taken from the original publications with comparisons and corrections to Howard’s final drafts where still extant.

Re-reading the Cimmerian’s adventures is like going out drinking with an old friend: you know all the stories but the pleasure of hearing them again cannot be dismissed. I also re-watched the 1982’s Conan the Barbarian, one of my favorite movies, the terrible Conan the Destroyer and the aggressively mediocre 2011 reboot (although I thought Momoa made a pretty good Conan.) And, to complete a total Conan emmersion, I re-read all The Savage Sword of Conan issues edited by Roy Thomas. So much barbarian action…

When I’m not whipping websites into shape, I am a business consultant to service providers, so most of what I read is related to business. I just finished Scaling Up by Verne Harnish, founder of the Young Entrepreneurs’ Association. The book is all about how to scale a business and what a lot of companies get wrong.

I really like that this book draws a distinction between starting a business and scaling a business, both two very different processes, but many “business gurus” lump them together.

There are many concepts in this book that aren’t a great fit for service providers, though the author indicates these strategies could be used for any business. For example, the author says there are four areas in which one needs to optimise their strategies and systems, and one of the areas is “routine.” As a systems strategist, I would argue that routine execution needs to be built into each strategy and system, and not treated as a separate system itself. If each system isn’t designed to be implemented, then ultimately the system won’t be as effective.

All in all I would recommend this book for any business owner to read, but keep an open mind and think about where you can improve upon these concepts instead of merely accepting them as commandments written in stone.

I’ve generally been a fan of Michael Connelly, dipping into his work here and there over the years. I realized a couple weeks ago that I’d never read the early Harry Bosch books. So I’m correcting that with The Black Echo: A Novel (A Harry Bosch Novel Book 1). I like to read series in order, so I can only imagine I first picked up a mid-series book laying around someplace way back when and didn’t realize at the time that it was, in fact, part of a series. Now, I will, of course, proceed to binge-read the complete Bosch books (in order). (Update: I’ve just moved on to Harry Bosch Book 2.)

In the car while driving this week, I started listening to Ken Follett’s A Dangerous Fortune. The narrator, Michael Page, has a wonderful voice, and that’s improving the story considerably.

Also, I’ve been trying to follow jesse.in.mb’s marvelous example and pare down my physical book collection. HAHAHAHAHAHA. I crack myself up!

This week I did manage, though, to take a box of about 3 dozen books to my Dad, from whom I received my voracious read-anything-all-the-time habit. He’s read everything in all the libraries of his county, so we try to keep him supplied with interesting works. This time he received all my Rick Riordan Tres Navarre books (all now available on Kindle if I want to revisit them periodically), along with a bunch of others.

Oh, yeah, and I am reading my constant companion: my pharmacology textbook.

I set aside a copy of The Lies of Locke Lamora at 1/5 of the way through, I was having a hard time maintaining interest.

On the audiobook front I listened to Ken Lozito’s Genesis, which was entertaining enough although some sections seemed like filler. L.T. Ryan‘s Noble Beginnings is a big ol’ no for me. It’s 6 hours of uninspired fight scenes read in a clipped tone. I’m reminded of Homeric poetry in the way the author used a series of stock phrases without alteration over and over again. Various characters “hitched up [their] shoulder[s]” 27 times and shrugged once…at the end. I’d kind of assumed the author was unfamiliar with the word.

I had thought about going on a rant abut how Catalyst Games has completely cocked up FASA’s Battletech, when I received a Mysterious Package in the post. Opening it, I discovered the following cookbook: 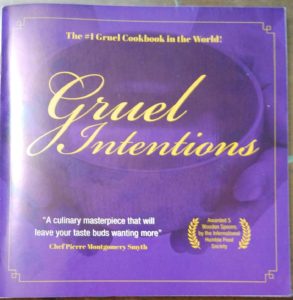 I assume that this was written by UnCiv, and forwarded on to me for a review prior to a second edition, or perhaps for an additional cover blurb. It is somewhat distressing that my post box location was so easily obtained, but that was a risk of becoming known to the Glibhedrin.

In any case, this is a wonderfully useful addition, as it allows me, through judicious variation of my orphan’s food supply to engage in carrot-and-stick motivation techniques, without the expense of obtaining carrots! My only criticism, minor as it is, is that in an effort to pad the book’s length to a full 28 pages, our UCS has engaged in excessive extravagance in his ingredients list on a few recipes. Butter, really?

ZARDOZ'S FRIDAY AFTERNOON AND SOMETHING IS GOING ON LINKS

ZARDOZ SPEAKS TO YOU, HIS CHOSEN ONES. ZARDOZ HAS LATELY SUFFERED SOME INDIGNITIES THAT WILL NOT BE PERMITTED TO STAND!…

[caption id="attachment_31279" align="alignright" width="300"] If this offends you, seek help immediately...or submit your resume to ESPN.[/caption] Well it didn't rain…