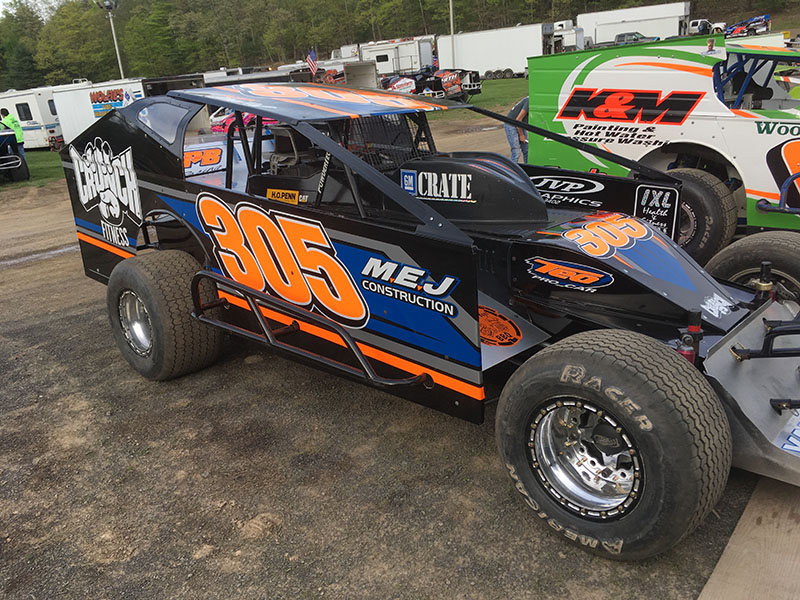 This is a brain droppings piece on the development of modified stock car racing in New York, New Jersey, and Pennsylvania, and a couple lessons that can be learned from it. My family has been racing for three generations, and it is without a doubt my biggest hobby and passion. Hopefully, the lesson is clear: without the guidance of a Top Man, people spontaneously created a sport that still thrives almost 70 years later.

In the late 1940s, much of the young male population returned from war with a decent education in mechanics. This set the stage for a transition from the special-built race cars of the past, to racing stock cars. In the northeast, the coupes and sedans of previous decades were pulled from junkyards and put to work on the dirt ovals as racing machines.

Over the first few years, innovation was rampant. Each week the coupes and sedans would become more modified. First went the front fenders, to allow for bigger tires with more turning radius. Then the engines were altered, custom building parts and boring out the cylinders to make the biggest (and fastest) motor. They went from being stock car races, to modified stock car races. 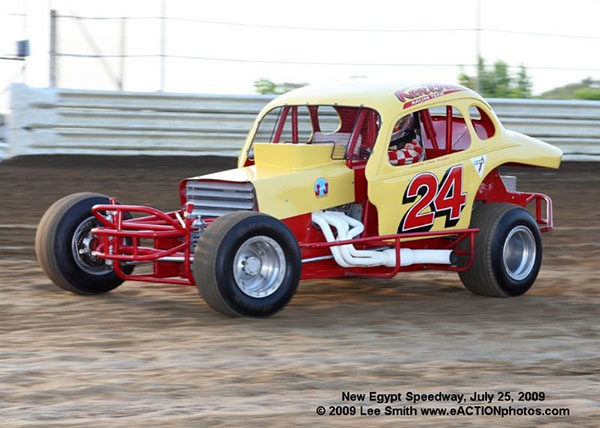 By the mid ’60s, the cars followed a basic formula, a ’55 Chevy frame, a ’40s truck solid front axle, a classic coupe body, and a 427ci Corvette engine. Most of the parts were gathered from junkyards, stripped off of old cars, or custom built. This is where the spirit of small time dirt track racing lies. A driver or mechanic could come up with something in their garage, build it themselves, install it onto a car, and win.

As 1930s coupes and ’55 Chevys began to transition from junkyard jalopy to collector’s item, the racers had to seek out a new body and chassis design. Enter the subcompact car. Turns out those cheap Pintos, Gremlins, Pacers and Omnis might not have race car hearts, but they did have the skins. The small, boxy style was easy to recreate with a sheet metal brake and some elbow grease. The bodies were made as small as possible, with the driver going from the stock left side of the car to the center, running the driveline directly between his legs. The modified stock cars began to stray further from their stock roots. 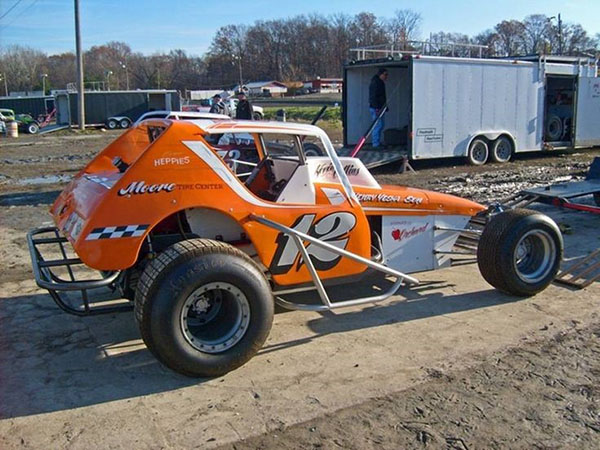 The innovative minds of the day took racing from junkyard cars racing for a couple hundred bucks, to highly tuned machines running for purses in the tens of thousands. The northeast touring series, which still exists today, brought regional and national sponsors into the fray. With more money available, drivers were willing to spend more to have a better chance at the prize (incentives and all that). Enterprising and successful drivers began to build their cars for other people. Speed shops began popping up to sell custom parts. The days of winning with a home built car began to fade.

The stock car moniker was finally dropped in 1981. At the end-of-season race at the Syracuse Mile, a driver from Florida and a car builder from Missouri showed up with a car that looked nothing like anything on the street. The rules of the time prohibited bodies that were too narrow to reduce weight and drag, but they made no mention of a maximum width. This was exploited by the team of Kenny Weld and Gary Balough, who showed up with a piece holding F1 inspired aerodynamics, with wide wings and louvers that sucked the car to the ground. The car won by a lap. Teams scrambled in the off season to imitate the aerodynamics of what became known as the “Batmobile” and the rules were altered to become far more restrictive. The sanctioning body vowed to never let this happen again, as the racers all deserved a fighting chance against such innovation. And so the cars went from varied bodies and individual pieces to uniform cars bought from a few dealers.

This year, one of my local tracks (Orange County Fair Speedway) will host the 57th annual Eastern States Championship weekend in October. Older than the Super Bowl, this race is a remnant of days gone by. It once hosted over 150 unique and homemade modifieds and packed the house with close to 10,000 fans. This year, 2018, it will still pack the house, with a weekend full of camping, racing, and general redneck debauchery. But the cars will be towed there in stacker haulers, they will all look exactly the same, with components that can be bought from two or three different suppliers. The car counts will remain strong; 60-70 will try to qualify for 40 spots. But the sport has definitely changed. If someone comes to the track with something new, it is more often called cheating than innovating.

How this connects to Glibs

You might wonder what this is doing on this site, as opposed to some blog. In my opinion, this was a description of what a completely unbridled marketplace can create. Rules were not developed before the class, but afterwards to fit what already existed. Many of these rules were misguided attempts to keep the sport safe and inexpensive that often had the opposite effect. The biggest rule, a mandatory 467ci big block engine, has priced many people out as these engines become antiquated and harder to find. If the rule was not in place, bored out small blocks would easily surpass the big blocks in use and efficiency, but a bureaucratic series that has the philosophy of “it has always been this way” will not allow it. After all, they collect the sanction money.

Many tracks operate independently with open motor rules and see good car counts and better competition. However, these small budget drivers are unable to run for the large purses that the series offers, hamstringing them from being able to grow their team. Almost as though having more restrictions gives the established, higher dollar teams a better chance of remaining dominant…amazing.

The story of modifieds is also one of order arising spontaneously and not from the might of a sanctioning body. Competition normalized, cars became safer and faster, all without the guiding hand of a Top Man. The track was a safer place when a wild driver would be taken care of in the pits by the team whose night he wrecked, as opposed to a he said/she said scenario arbitrated by a track promoter and sometimes the local police.

Hopefully you enjoyed this and learned something. Racing has been in my family for generations, and I tried to keep it as brief and true as possible. The links to libertarianism may be tenuous, but they are sincere.

As a parting word, I would ask you to go to your local dirt track. Bring the family, it is happening somewhere close to you (unless you live in Massachusetts; I have yet to find a dirt track there). Not all racing is the glamour of F1 or NASCAR. The top billed car classes may be pre-built, but most tracks have beginner classes that are pulled out of used car lots. Plus, the drivers are still the same old blue collar guys looking to have a good time on a Friday or Saturday night by participating in a sport they love.

Any Glib that lives around the NY/NJ/CT area, try to get to the Eastern States 200. The racing is better than any major series, and the beer is cheaper and cold.

Thanks to Tundra for getting me off my ass to write this finally.

Special thanks to STEVE SMITH for stepping up to the plate this morning. The 70s really were a strange time.…