The Party is Over in Illinois

Things are not good in the Land of Lincoln and believe it or not, they’re only getting worse.  Illinois already has the lowest credit rating of any state in the union (BBB- according to S&P and BBB3 according to Moody’s), along with having the dubious distinction of being the only state in the union to ever have a credit rating so low.  Coupled with this, the State continues to run deficits (with its deficits representing roughly 10% of its total revenues), along with having a backlog of bills in the hundreds of billions (for comparison, the State’s total operating fund revenues total roughly $60 billion), and having several woefully underfunded pension plans (the liabilities are conservatively estimated to total $100 billion).  Despite all this, though, recent news suggests that today may be remembered as better times in the State’s history. 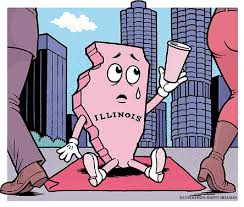 Most likely future state of the State

The State is now floating an idea to  issue $100 billion in new bonds in order to shore-up its pension plans.  Essentially, the State is hoping that it can issue taxable debt (pension bonds are not tax exempt) and invest it in stocks and corporate bonds (which are the bulk of the underlying assets in a pension plan) and achieve a return greater than the interest payments on that debt.  This is utter insanity.

At the State’s current rating category, the taxable bond interest rate on such debt would be roughly 4%, which is a lazy estimate and assumes that the issuance of such debt would not automatically trigger rating agencies to downgrade the State to ‘junk bond status’ (the State’s BBB- and BBB3 ratings are currently just one step above ‘junk’).  More likely than not, the State will have to pay an interest rate well above 4%, particularly since such a large debt issuance would only attract a very small segment of the market (more supply than demand equals higher interest rates for the issuer).  But, even assuming a 4% interest rate, the State will have to come up with roughly $4 billion in interest payments each year (again, this is a lazy estimate and does not account for several factors and the interest payment will likely be larger).  Remember, the money from this debt issuance is suppose to be invested in its pension plans, therefore even if the returns on this investment exceeds 4% on a yearly basis (which is likely in the near term) that money is just reinvested into the plans- the State cannot access those funds.  Additionally, the State is hoping that its interest payments will be less than the annual pension contributions that the State is required to make.  At a 4% interest rate (which, again is a very conservative estimate) the interest payments would be slightly less than the required annual pension contributions, however the State will have no flexibility with regards to making these interest payments.  With annual pension payments the State has the ability to reduce or not make such payments (which has occurred too often in the past and has resulted in the underfunding of the pension plans), but interest payments cannot be missed.  So in order for the State to ensure adequate revenues to make regularly scheduled interest payments it must raise taxes. 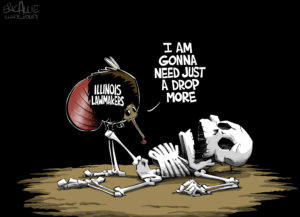 The State of Illinois just raised its income tax rate in 2017.  The City of Chicago, the State’s largest municipality, has also been on a tax raising spree and will be raising taxes even more going forward.  And on a completely unrelated note, I’m sure, while these tax increases have been occurring Cook County (the second most populous county in the country and home to Chicago) has been losing more residents than any county in America; the City of Chicago has been losing residents (more than any other major city in the country), and the State of Illinois has been losing residents (more than any other state in the country).  People vote with their feet and they’re leaving the Land of Lincoln. 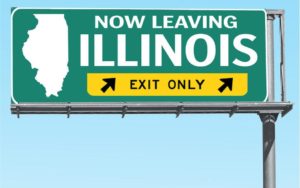 Many seem to take this road, lately…

Not to worry, though, while the State’s financial position spirals out of control Republican governor Bruce Rauner and the Democratic majority in the General Assembly have been focused on the important issues (cosmotarian moment!, because reduce government spending, but not woke spending) What’s the point of bankrupting a State if you can’t approve more spending on culture war issues?  Somehow, I don’t think this spending will improve the State’s population decline.

Whether these pension bonds are issued or not, the fact that the State is floating such an idea suggests that cost cutting reform is not being considered.  This means that Illinois is irrevocably broken.  No change in political leadership, whether in the legislature, or in the executive, can salvage the situation – this problem has long festered under both Republicans and Democrats.  This is a tragedy of the State’s own making, more than anything.  And though I fully expect Congress to discuss an ‘Illinois bailout’ within the next ten years, this misery should only be borne by the Illinois electorate and the poor decisions that it continued to make in the voting booth.  Let this be a lesson to the rest of the country.

Hey, guys, I'm sure this will get us labeled as a white supremacist group, but I didn't want the URL…

Its the middle of the week and the Patriots are still talking about the game.  Oh, I think I have…