The Myth and the Mouse: A Journey in Fan Editing

Part One: The Myth 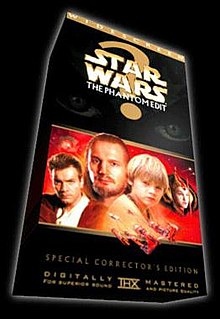 Fan editing is a fairly simple concept, it is taking an existing film and using video editing software to alter the film in some way. It rose to prominence in 2000 when a video called ‘The Phantom Edit’ started making its rounds around Hollywood. This was a re-edited version of ‘Star Wars The Phantom Menace’, and as internet technology grew this video was made available to people across the country. As video editing software became more ubiquitous more people took on fan editing as a pastime and began sharing their work across the internet.

But wait, back-up, let me start earlier. When I began as a young film maker I didn’t have access to the best equipment. This was the early 90s and I didn’t come from a very well off family. When I started I had only a 1987 VHS camera that I borrowed from my aunt. Since I didn’t have any friends who were also interested in film making, my early attempts were mostly stop motion with Fisher Price Little People. I edited these in-camera; meaning I would push ‘record’, wait for the mechanism to engage, count to five, push ‘stop’, move the characters and then repeat until I was done.

Later on, in the mid 90s, my brother-in-law had a Hi-8 camera I could borrow, and by then I had a few other kids who were interested in acting for me. This was a time of great anticipation; ‘Star Wars The Phantom Menace’ was coming, the first trailers had debuted. So, naturally we made a Star Wars Fan Film. It was simple and crude, but I upped my editing game to what is called ‘linear editing’. This is basically two VCRs hooked together, or in this case the Hi-8 camera fed into a VCR. In linear editing you play the cut you want on the first machine while recording on the second. Slow, sloppy and not very fun. This cut of the fan film was lost over time.

When I made my way to film school in the early 2000s, a new way of editing was making its way from the echelons of Hollywood to the lower classes. This was ‘non-linear editing’ (NLE), or what we know of today as editing software. This was made possible by the advancement of digital video, where it became cheaper and easier to import video onto a computer system. The gold standard was (and mostly still is in the industry) Final Cut Pro. My film school had a whole new lab of Macs to learn on, but the underclassmen didn’t get much time on this new equipment. Instead we spent our time in the dark dingy recesses of a building in a true editing suite, where we would cut actual film by hand and splice it together with tape. We weren’t even allowed to use the automated machines, we used hand cranks. Before I was allotted much time on the NLE system I had to drop out of school for a whole host of reasons, but by this time the price of computers and digital cameras had come down enough that when I returned home I had equipment and could begin. 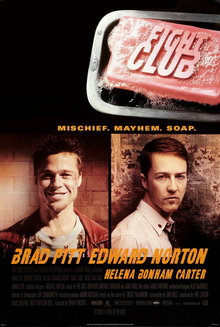 Once at home and working a full time job I had money to buy equipment, and now more friends interested in participating. I now had the lowest end NLE program, Windows Movie Maker, and decent digital video camera. Thus I began a spree of shooting and editing films. I got better equipment, worked on techniques and eventually enrolled in a new school closer to home. It is around this time that I did my first ‘fan edit’. I put it in quotes because I didn’t really change anything about the film. You see, my favorite film of all time is ‘Fight Club’. I have literally watched it over a thousand times. Most of these times I had put it on to help me fall asleep, I suffer from insomnia quite often, but this film lulls me to a soothing sleep. There were some problems with that though. There are certain points in the film where the loud noises would wake me up once I had finally fallen asleep. Then the movie would end and go back to the DVD menu, the music of which would also wake me up. It is for those reasons I ripped the movie onto my computer and, well, I just quieted down those loud parts and put it on a DVD with no menu music. That was it. But it was a step.

It was around this time that news of ‘The Phantom Edit’ finally worked its way to me across the internet. It had never occurred to me before that I could do that myself, I don’t know why. Other than that first small foray I had never thought about changing the work of someone else to better fit my vision. Sure I knew what parts of movies I would have cut had I been working on them, but it had never crossed my mind to do it after the fact. Thus began experimentation. I started out with that very same film ‘Star Wars The Phantom Menace’, a film I saw many flaws in but also some virtues. Gone were midichlorians. Gone were a vast array of fart jokes. Gone were stupid kid lines. This first cut was clunky, but showed promise. I began tinkering with the next few films in the series. Gone is Anakin’s whining about sand. Gone was so much of what I hated. 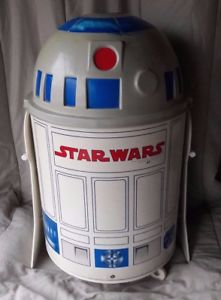 There is a saying that if it were up to the film maker a movie would never be finished. You always see something you want to tinker with. George Lucas has proven this himself with all his fiddling with the original trilogy. I am the same way. Every time I watch my work (either my original work or fan edits) I always see something I can improve. I also like to try new techniques each time I do an edit. For this reason for a long time the three prequel movies were the only fan edits I did, because it is always an on-going effort, every few years I redo the edits to try and make them work better. As a matter of fact in preparation of this article I found new changes I wanted to make to one of the films. And also, for the most part if I like a film I don’t feel the need to tinker with it. It is only the cases where I see something that I love buried in a pile of shit that I invest myself to try to bring my vision of another person’s work to life. I’m a grown man with a life size R2-D2, if I see something Star Wars related that I think I can make it entertaining to myself, I’ll do it. Alas, alas the new trilogy…

Mostly what I tried to do was align the prequel trilogy with the original trilogy, along with removing some of the bad performances and childish jokes where I could. As I mentioned above, this included getting rid of references to midichlorians, but also a few other things like the fact Anakin was ‘already a great pilot’ when Obi-Wan met him. So gone is the kid hero accidentally saving the day, now he is just a good pilot strong in the force. Truly Anakin should have been at least in his early teens, but that is not something I have the power to fix. My approach also meant cutting things others may not agree need be cut, like Yoda using a light saber. My feeling from the original films was Yoda represented the more pacifist side of the Jedi. As I had to piece together a more cohesive story while cutting out so much, I also reinstated a few deleted scenes, which aren’t great but I felt moved the characters forward better. Alas, just as I do not have the power to change Anakin’s age in the first film, I also had no control over the video quality of these deleted scenes where I could find them so they are mostly glaring in there inclusion, but I feel make for a better film.

Also, as I said I like to try new techniques, sometimes I don’t do them as well as I would like, but they serve their purpose in terms of the story. There is also the saying attributed to Shakespeare, ‘brevity is the soul of wit‘. This is usually only applied to comedy, however, I’ve found it works with most things in film. The more common saying now is ‘less is more’. And this is why many action sequences become boring and stale. So contrary to what many people many think, cutting the length of an action sequence can cause it to have a greater impact on the viewer. The action sequences in the prequel trilogy are terribly bloated. I have tightened those. 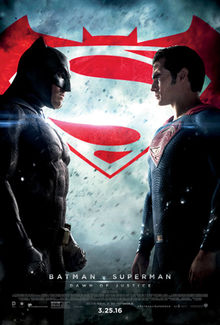 A more recent case was ‘Man of Steel’ and ‘Batman V Superman’. I love Batman, and I really like Superman. When I watched ‘Man of Steel’ there were some parts I liked, but no way to connect them into a truly entertaining narrative. I had higher hopes for ‘Batman V Superman’, but the film itself was a mess. However, in the way the story was laid out, a grand vision emerged in my mind. The connections between the two movies were clear in my head and I began writing a cohesive narrative within my brain. So, when ‘Batman V Super: Dawn of Justice: Ultimate Edition’ was released on blu-ray I set to work combining the two lackluster films into one cohesive story. I worked on it for months, going back and forth on where to place scenes, watching and re-watching to see how it flowed as a whole. Finally I finished it. My masterpiece. And then, it sat there on my computer along with multiple cuts of Star Wars movies.

You see, fan editing exists on the legal outskirts of ‘fair use’ laws. As long as you own copies of the movies you edit and don’t try to make a profit off of it you are technically in the clear. When you share it with a friend, it gets murkier. When you put it out on the internet for anyone to see murkier still. As many of you, I take caution in all legal matters. Thus, to this point I’ve only shared these works with a few close friends. I don’t have many people I know who will take six hours to watch and critique my Star Wars edits. Even fewer interested in seeing a 3 hour long Batman V Superman mash-up. But, as the writing of this article betrays, this is something I enjoy very much and I would like to share with others. So, for the first time ever I’m publicly sharing these works.

I claim no ownership over the contents, they are merely a vessel for my own thoughts on the content.

Only watch them if you own a legal copy of the films represented.

And now the links!

And finally, the one I’m sure you all want to see the most, that fan film I made in the 90s. No, you won’t get to see me in it, I was behind the camera. This also isn’t the cut I did back then, I found the original hi-8 cassette a few years back and cut it together, leaving in all the stupid mistakes and not polishing it up any. There really isn’t a plot, just a few kids that wanted to make a movie.

There's only one thing that makes the shithole we call "Twitter" worthwhile, and that's Thoughts of Dog. It's got all…